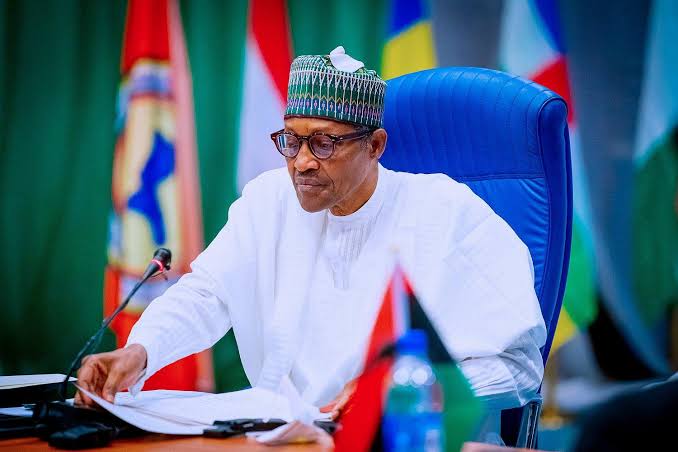 President Muhammmadu Buhari on Thursday in Abuja appealed to Member-States of the Gulf of Guinea Commission to remit their outstanding Annual Assessed Contributions to the Secretariat, saying that continued non-payment by the majority has greatly affected the ability of the Commission to fulfil the mandate for which it was established in 2001.

The President made the appeal at a virtual meeting of the Heads of State and Government of Member States of the Commission, convened to review progress on efforts to deal with the maritime challenges in the region.

The President said the inability of member-states to pay their assessment was threatening the continued existence of the Commission.

He also called for urgent collective action against the dangers and threats affecting maritime security in the Gulf of Guinea Region.

President Buhari told the Summit that Nigeria considers the effective functioning of the GGC as strategic to the collective security interest in the Gulf region, particularly in addressing issues such as piracy, proliferation of Small Arms and Light Weapons, protection of marine resources as well as irregular migration to the region.

“As a demonstration of our firm commitment towards the repositioning of the GGC into a more vibrant Organization that will effectively deliver on its mandate, Nigeria hosted the 4th Ordinary Summit of the Assembly of Heads of States and Government of the Gulf of Guinea Commission (GGC) from 21st – 23rd November, 2017 in Abuja.

“In addition, Nigeria hosted the 11th Ordinary session of the Council of Ministers of the Gulf of Guinea in Abuja from 19th to 20th November, 2019 as part of our efforts to revitalize the activities of the Commission.

“These sessions observed, inter alia, that non-payment of Assessed Contribution by majority of the GGC Member-States to support the Commission’s operational budget has seriously affected the effective delivery of the organization’s mandate.

“Meanwhile, Nigeria has championed several efforts towards fighting maritime insecurity in the Gulf of Guinea,’’ the President said, highlighting that in June, 2019, Nigeria’s National Assembly passed the Suppression of Piracy and Other Maritime Offences Act, 2019, (POMO Act) which aims to prevent and suppress Piracy, Armed Robbery and any other unlawful acts against a ship.

Furthermore, the President pledged that Nigeria would continue to deploy significant resources towards tackling piracy in the Gulf of Guinea.

“Through the Deep Blue Project in June 2021, the Government of Nigeria unveiled $195m worth of boats, vehicles and aircraft to spearhead the country’s fight against piracy in the Gulf of Guinea.

“The operational mechanisms in the Gulf of Guinea Region as you know are similar to those in some other regional organisations.

“For instance ECOWAS and ECCAS have adopted protocols on the security of their Maritime domains and also set up Regional Centers for Maritime Security respectfully.

“It is therefore imperative that the GGC adopts a collaborative strategy to engage partners and donors in creating awareness on the objectives of the organization, with a view to synergizing for more effective results towards fighting maritime insecurity in the GGC region.

“As Your Excellencies are aware, another challenge which confronted the organization in its fight against maritime insecurity in the region is the COVID – 19 Global Pandemic and its attendant negative impact on the activities of the Gulf of Guinea Commission, in 2020 and early 2021.

“What we need now is to work more than ever towards the revitalization of the organization by holding regular meetings and Summits of the Commission.”

The President used the occasion to express his profound gratitude to fellow Heads of State for the support from all Member States during his tenure as Chair of the Assembly of Heads of State and Government of the GGC.

“This Summit marks the end of my chairmanship and will also be my last Summit in the Gulf of Guinea as Head of State. As we decide on the next Chairmanship, I am confident that I am bequeathing a revitalized Commission.

“I therefore urge you to extend the same support and solidarity I enjoyed during my tenure to my successor to ensure continuity in our efforts and commitment to address the challenges of our organization.”

The Nigerian leader congratulated Ambassador Florentina Ukonga, the Executive Secretary of the GGC, and her team for their hard work and commitment not only towards the organisation of this Summit, but in running the organization effectively.

Acknowledging the great work done by the outgoing Executive Committee led by Ambassador Ukonga in spite of the paucity of funds the Committee has been grappling with, the Nigerian leader expressed hope that the virtual Summit would yield fruitful results that would move the organisation forward.

President Nana Akuffo-Ado of Ghana emerged the new President at the end of the Summit.