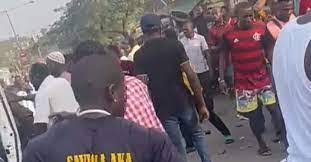 Tragedy struck in Calabar metropolis on Tuesday as a Camry car lost control and rammed into the crowd, killing over 15 persons with several others injured during the Bikers’ Carnival.

The Bikers’ Carnival is one of the innovations brought into the Calabar Carnival by Governor Ben Ayade to add colour and glamour to the annual festival introduced by former Governor Donald Duke in 2004.

A witness reportedly said that shortly after the Bikers’ parade was flagged off at about 5:00pm, one of the Camry cars on the parade, sped off from Eleven-Eleven Round-About on Calabar Road heading to Mary Slessor, one of the adjudication points, and lost control, ramming into the crowd around the Central Mosque at Bogobiri.

It reportedly killed about 5 persons on the spot.

The witness further said that after about 20 minutes of the incident, another five persons died while others died on the way to hospital and a few died at various hospitals to where they were rushed.

He said those affected were some members of the Hausa community, passers-by and shop owners who came for one business or the other around the Bogobiri axis.

According to the witness, the incident caused pandemonium as people ran to shelter for safety following reaction by the Hausa community whose people were mostly affected.

As at press time, the corpses had been evacuated while the injured persons numbering over 10 had been rushed to some hospitals for medical attention.

Security operatives have cordoned off the Mary Slessor -Bigobiri axis to forestall breakdown of law and order just as the Carnival ended abruptly.

The state governor, Ben Ayade was already seated with other dignitaries when the incident occurred.

Confirming the incident, the Sector Commander of the Federal Road Safety Corps, Cross River, Maikano Hassan, said it occurred when a driver of a Camry car lost control and rammed into the crowd of onlookers.

Hassan, who could not give the figure of casualty, said that victims of the incident had been evacuated to hospital.

According to him, “I am on my way to the hospital to ascertain the figure of deaths and those injured.

“But I can confirm that the report is true and will get back to you as soon as I am able to establish the number of casualties.”