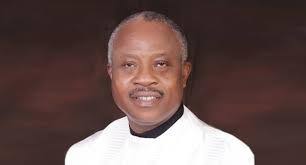 The Abia State governorship candidate of the All Progressives Congress in the 2023 general election, Ikechi Emenike, has decried the numerous court cases against the party in the state. He was, however, confident that he will, at the end present the Certificate of Returns to the National Chairman, Sen Abdullahi Adamu and his National Working Committee.

Emenike stated this at the Buhari House National Secretariat of the party in Abuja on Tuesday when he led a high powered party delegation from the state on a thank you visit to the National Chairman, Sen Abdullahi Adamu and his National Working Committee (NWC) for a good effort that united the warring factions.

He noted that the barrage of court cases was as a result of the viability of the party in the state and added that other political parties are dormant which is why people are not interested in their affairs.

“We are here primarily to assure our leader, our national chairman, that APC is intact and was ready to deliver the party

“We are here to commend our leader, the national chairman for his leadership. It is probably one that has brought the kind of cohesion and peace we enjoy and we want to thank him. Also show solidarity for his leadership. We’re here not to disagree, but to give honour to whom honour is due.”

He tasked those doubting the possibility of the party to clinch power in the state in 2023 to visit the state before commenting, noting that the sitting governor, Okezie Ikpeazu of the Peoples Democratic Party has by his woeful performance, handled almost 40% of campaign for the APC.

“What I want to assure you is that through his performance, he has done almost 40% of the compaign and what we’re doing is just trying to harvest most of the grounds and cover all the loopholes and work towards that.

“I know a lot of people are still doubtful, depending on line of propaganda and information. Please before you say anything about the APC, visit your state, go to the polling booth on the wards and find out the status of today’s APC and others whether we’re ready for victory or not. We pledge that we will show him certificate of return of victory.”

Emenike dismissed talks about the popularity of Labour Party’s Presidential Candidate, Peter Obi, in the South East with a wave of the hand saying they’re only popular on the internet and are therefore not a threat to APC’s victory in 2023.

The APC governorship candidate maintained that his party does not need the activities of the G-5 enstraged governors of the PDP to cruise to victory.

Earlier, the National Chairman of the APC Senator Adamu said, “All I can tell you is that the delegation of very eminent members of the Abia State chapter of our party led by the governorship candidate are here today. They’re not coming here for the reconciliation, they are coming out to thank the party for the efforts we made in the state.”