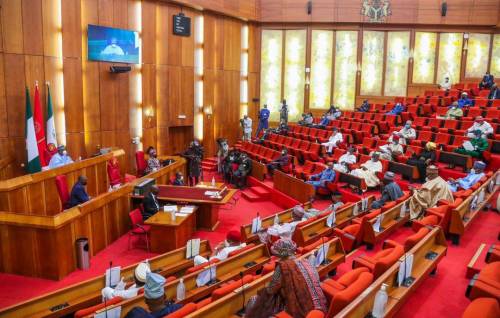 The 2023 Appropriation Bill on Wednesday scaled second reading in the Senate.

This followed the presentation of the lead debate by the sponsor and Senate Leader, Ibrahim Gobir at plenary.

Leading the debate on the general principles of the bill, Gobir said that it was laid before the chamber on October 7 by President Muhammadu Buhari.

“The Bill is deemed to have been read the first time by virtue of its being laid before the Joint Session of the National Assembly on Friday.

He said that the bill sought to authorise the issue out of the Consolidated Revenue Fund (CRF) of the Federation, the total sum of N20.51 trillion for the year ending on December 31, 2023.

“The 2023 budget proposals submitted by the executive are not strange to us here in the National Assembly having approved the Medium Term Expenditure Framework (MTEF).

“What remains for us is to closely examine the contents and the details in order to sort things out and smoothen the rough edges,” he said.

Contributing, Mohammed Ndume (APC-Borno) said that “What we witnessed in this administration is an improved implementation of the budget, in terms of releases.”

He lamented the continuous rise in the recurrent expenditure and debt servicing of the budget.

“When you borrow to spend on recurrent and this money is going to less than 5 percent of Nigerian workers then there is a problem.

“This rise in recurrent expenditure should be investigated.

“You have the introduction of Treasury Single Account (TSA), Government Integrated Financial Management System (GIFMIS) and Integrated Payroll and Personnel information system (IPPIS) which are supposed to control this cost but instead you know Nigerians.

“I suspect we have more Yahoo Yahoo people in the government than you find in the hotels and on the street,” he said.

Ndume, also the Chairman, Senate Committee on Army said that the budget of the Nigerian Army was grossly inadequate.

“We are saying the challenge of insecurity should be addressed which is very important.

But guess what; the capital budget of the Nigerian Army again is only N32 billion,” he said.

President of the Senate, Ahmad Lawan cautioned government Ministries, Departments and Agencies (MDAs) against failure to attend budget defence sessions at the Senate.

The bill was thereafter referred to the Senate committee on finance and appropriation.