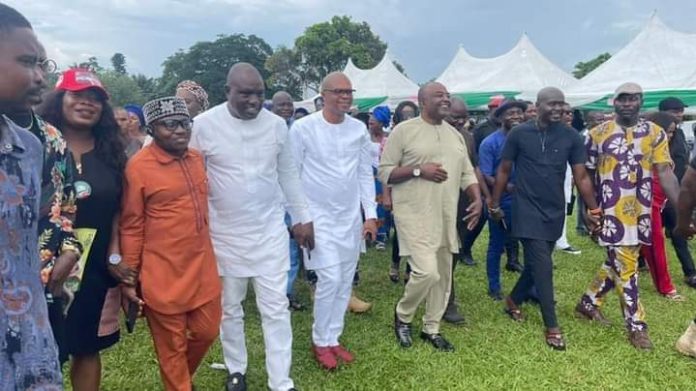 The Chairman of the Peoples Democratic Party (PDP) in Delta, Kingsley Esiso, has urged members of the party and residents in the state to massively vote for the PDP in the 2023 general elections in honour of Governor Ifeanyi Okowa who is the Vice presidential candidate of the party.

He said Deltans should support the Atiku-Okowa ticket by ensuring that 95 per cent votes cast in the state goes to the PDP.

Esiso made the call at the general meeting of the Isoko Unity Group held on Sunday at Emevor, Isoko North Local Government Area of the State.

The state party boss opined that, this was the first time Delta would be having a clear opportunity to produce a Vice-President of the country and urged the people to close ranks and support their own.

According to him, 2023 is going to be a historical year for Deltans because “we have a chance to make history by producing the first Vice President of the country from the state”.

“This can only be possible by the grace of God and with your massive support. So let us close ranks irrespective of our political leanings and support the Atiku-Okowa ticket in the interest of our state.

“We can only succeed in this regard when we are united. I therefore call on all the leaders and stakeholders of our great party in Isoko and across the state to come together to deliver all our party candidates,” Esiso stated.

He said that the group was committed at all times to the electoral victory of all PDP candidates and to the success of the Governor Okowa-led administration in the state.

He remarked that the general meeting was called preparatory to the commencement of campaigns ahead of the 2023 general elections and urged members of the party to close ranks and work together to deliver all party candidates in the coming elections.

He said, “the PDP primaries have come and gone, it was competitive, transparent and credible. All our candidates were voted for by the relevant delegates at all levels.

“As it is in politics, only one winner can emerge for a given office and I urge all the other contestants to join hands with our candidates to deliver our party.

“For the February elections, our goal is to deliver our candidates 5 over 5 and this is achievable with the help of God and all of you.

“I am sure nobody here will want a continuation of the state of divisiveness, insecurity, indebtedness, mass poverty, cluelessness in which the APC-led Federal Government has plunged the nation.

“Let us therefore work hard to rescue our nation from them for our common good by working hard for the Atiku-Okowa ticket as well as all other PDP tickets,” Oweh stated.

He commended Governor Ifeanyi Okowa for raising the bar of good governance in the state and lauded the leader of Isoko politics Hon Leo Ogor for his good representation and support for the people at all times.

In their goodwill messages, Ogor, Diden, Ukodhiko, Odior and Ogorugba called on party members to unite in delivering all party candidates in the 2023 general elections.