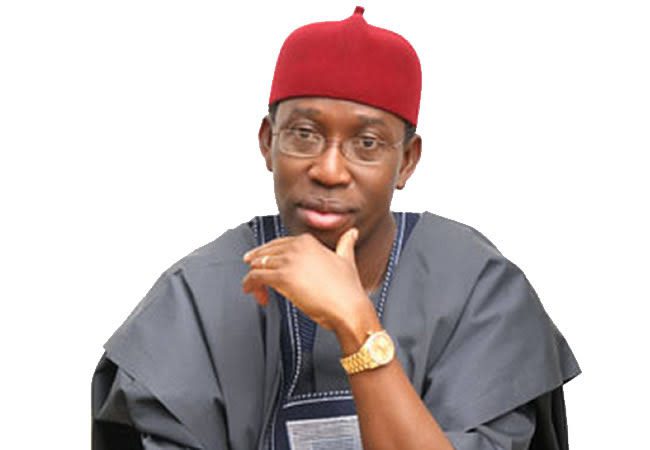 Following last Saturday’s Presidential and Gubernatorial Campaign by the AllProgressives Congress in Warri, Delta State, Governor Ifeanyi Okowa on Monday crossed swords with the Deputy Senate President and APC governorship candidate in the state, Senator Ovie Omo-Agege. Okowa said the people of the state were “too enlightened and exposed to fall for cheap lies and propaganda being deployed” by Ovie Omo-Agege in the state.

Speaking at a news conference in Asaba through his Chief Press Secretary, Olisa Ifeajika, the Governor said that rather than avail Deltans with his manifesto, Omo-Agege engaged in lies to deceive Deltans, but warned that the people were very discerning and would not fall for the calumny against the governor and the State Government.

Okowa said he never betrayed South Nigeria in becoming the vice-presidential candidate of Peoples Democratic Party (PDP) as Omo-Agege declared during the campaign.

According to him, after the emergence of the presidential candidate of the party from the North, it was automatic that his running mate will come from the South, and for this, Okowa was found worthy to be selected having met the criteria set by the Presidential Candidate, Alhaji Atiku Abubakar.

He also faulted Omo-Agege’s claims that nothing was done in the state with monies received over the years, disclosing that in his (Omo-Agege’s) Orogun community alone, the state government executed five important road projects.

“Across his Ughelli North Local Government Area, we have executed no fewer than 20 projects and across his Senatorial District, no fewer than 88 projects have been executed by the Okowa administration. Let him tell Deltans what he has achieved from the Federal Government where he sits as the second-in-command at the Senate. It is on record that the Senate where he is a prominent member has been adjudged the worst since the fourth Republic began.

“It is this same National Assembly where he presides over that watched haplessly as President Muhammadu Buhari took our debt stock to over N60 trillion. Most times, the President collected loans, which he has continued to do almost monthly, without recourse to the Senate, in blatant contravention of the law. The injury inflicted on Nigerians by the APC through its maladministration in the country is fresh and tough on the people, yet the party is shamelessly campaigning for another chance to lead,’’ he said.

On the issues raised by APC’s Presidential Candidate, Bola Tinubu and former Governor of Edo, Adams Oshiomhole, at the party’s rally in Warri on Saturday, the governor said “we will not join issues with Bola Tinubu and Adams Oshiomhole; they should first clear themselves on issues of identity and scandals before casting aspersions on Okowa, a man with sterling credentials.

“But, we are not surprised at the way both men spoke at the rally, because in APC, lying and abusing people are in their DNA. And, the reason is obvious frustration.’’

He said work on some of the legacy projects of Governor Okowa’s administration was still ongoing in spite of the delay in accessing the bridging finance the government sought, adding, however, that “when we finally accessed N30 billion out of it, the governor, in his transparent culture, personally disclosed it to the media. So, we have nothing to hide here in Delta. That is the much that the State Government has collected from the bridging finance it sought and which some persons, including Omo-Agege, had ignorantly dubbed as loan of N150 billion and have continued to peddle it.”

He said that Oshiomhole, who was sacked as national chairman of APC by chairman of his Ward in Edo, was suffering from frustration, especially after the defeats he suffered in all his battles in Edo, the worst being when he tried to stop Governor Godwin Obaseki from getting a second term.

“Hundreds of Oshiomholes and Tinubus couldn’t do anything about the battle. They lost it and it is the same way they will again lose to better option of Atiku-Okowa and the PDP,’’ the spokesman added.

Tinubu, Omo-Ageg and Oshiomhole had during the various addresses at the Warri Township stadium had alleged financial recklessness on the part of the PDP such that in 23 years of ruling the state and in spite of the humongous revenue it has earned over the years, there was nothing tangible to show for it. They had told Deltans that the APC would provide a better alternative to the ruling party in the state and that they should vote for Omo-Agege next year as their governor.