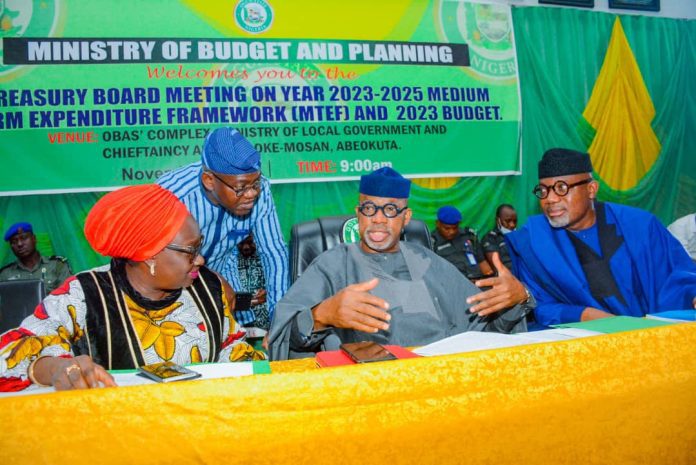 The Ogun State governor, Dapo Abiodun, has said that no fewer than 203 inputs representing 95 percent of demands made at the citizens town hall meetings held across the four divisions of the state have been incorporated into the budget proposal for the year 2023.

Abiodun stated this on Wednesday at the Treasury Board meeting held at the Obas’ Complex, Oke-Mosan, Abeokuta.

He posited that the Town Hall Meetings, apart from being avenues to reach out to more citizens to harness their inputs into the 2023 budget, also served as an important aspect in his administration’s inclusive governance in budget preparation.

Abiodun further explained that the Medium Term Expenditure Framework was not meant to produce budget, but how to develop good policies through the retooling of budget, emphasizing that it was important to think of each stage of the budget process in terms of roles in developing and implementing the state policies.

He, however, noted that it is imperative that adequate funds are located to areas that would have direct impact on the socio-economic well-being of the people.

The governor remarked that the 2023 budget is more important than the previous ones as the state requires a holistic constitution of the people’s needs and judicious application of the limited resources to areas that bear on the welfare of the citizenry.

He added that his administration would work to sustain all the developmental projects spread across the state that have a significant impact on the people, while all the ongoing projects would be given the desired attention towards completion.

Abiodun stated that his administration had introduced the Medium Term Revenue Strategy, which is an improvement from the traditional expenditure to revenue driven budget by identifying and working on the major revenue generating agencies with a view to enhancing and sustaining revenue mobilisation, collection and enforcement.

The.governor maintained that “the state fiscal is based on providing the enabling business environment for private and public sectors partnership through improving the efficiency and effectiveness of key processes including land administration, business registration, construction permit, land titling and the provision of key infrastructure and incentives to attract more investors to the state”.

While assuring that 2023 budget would be all embracing, Abiodun submitted that his administration had internalized policies to ensure efficiency and value for government spending as well as maintain an optimal balance in capital and recurrent expenditure in order to achieve micro economy stability and sustainable development.

In his welcome address, the Commissioner Budget and Planning, Olaolu Olabimtan, said the state was committed to a better atmosphere for businesses to thrive, while government would continue to deliver quality services to the people.

He said the Treasury Board meeting was to consider how much is needed, how to raise it, allocate and account for the funds, urging all stakeholders to be active participants in ensuring a budget that would be people’s friendly.

The Economic Adviser and Commissioner for Finance, Dapo Okuboyejo, in his remarks, said the budget was meant to stimulate the post COVID-19 state economy by upscaling infrastructure and other sectors that would engender sustainable growth in the State.

Highlights of the meeting is the presentation by heads of ministries, agencies and departments, their budget estimates for 2023.