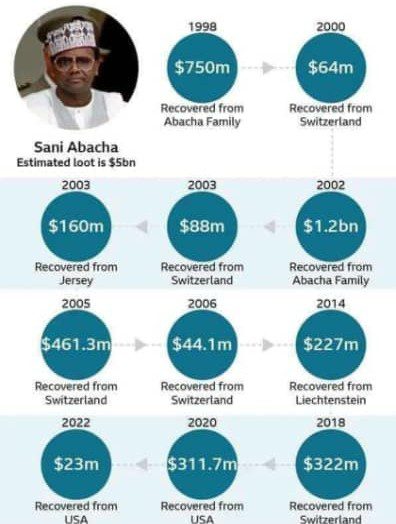 The total amount of looted funds recovered from late Head of State, General Sani Abacha in the past 24 years has been put at $3.65 billion.

This was revealed by an infographic by the BBC with data gathered from the Federal Government, World Bank, and Transparency International.

The Federal Government of Nigeria and the United States of America had on Tuesday signed an agreement for the repatriation of $23 million, being assets looted by late Head of State, General Sani Abacha.

In a remark at the signing in Abuja, the Attorney General of the Federation and Minister of Justice, Abubakar Malami, had said since 2016, his ministry, the United Kingdom National Crime Agency (UK NCA), and United States Department of Justice (USDOJ) had been working closely with the legal representatives of the Federal Government to finalize litigations related to the Abacha linked assets.

Malami noted that based on agreement between parties, the UK High Court granted the NCA a registration and recovery order on July 21, 2021, which was sealed by the court on August 4, 2021.

He said, “The forfeited Mecosta/Sani assets were subsequently transferred to the NCA, which on February 7, 2022, held that the sum of $23,439,724, pending the execution of the asset return agreement between the FRN and the USA.”

He added that in line with the agreement, President Muhammadu Buhari approved the use of the funds for the on-going presidential development infrastructural funds projects, which include the Abuja-Kano road, Lagos-Ibadan express way and the second Niger bridge, which are being supervised by the Nigerian Sovereign Investment Authority.

“The President’s mandate to my office is to ensure that all international recoveries are transparently invested and monitored by civil society organisation to complete these three projects within the agreed timeline”, he said and urged the US government not to relent in supporting Nigeria’s commitment to speedy and transparent management of returned assets.