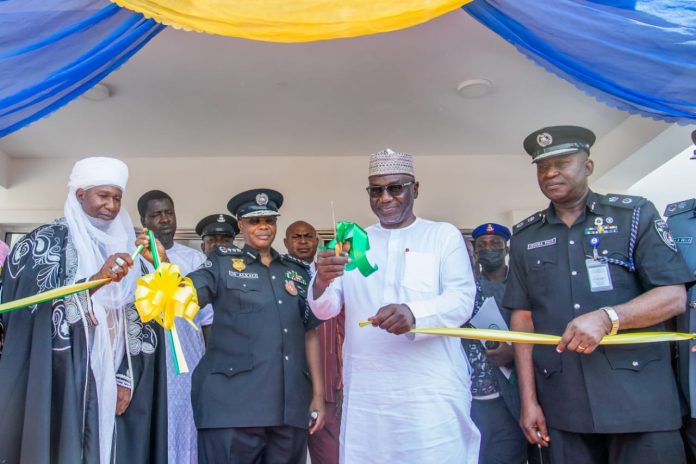 Kwara State Governor AbdulRahman AbdulRazaq on Tuesday acknowledged the important roles the Nigerian Police Force is playing to maintain law and order and guarantee safety in all parts of the country.

He said no investment will be too much to improve their working condition and welfare.

AbdulRazaq commended the Inspector General of Police Usman Alkali Baba for uniquely seeking to promote the well-being of the police officers and equip them with necessary infrastructure to succeed.

The Governor spoke in Ilorin at the commissioning of a New Model Police Station along Madi Road in Ilorin West LG of Kwara State — an edifice built at the instance of the IGP.

“We are privileged to be one of the first states to benefit from this initiative. Needless to say that the Police Force has gone through several phases in its development. One of the phases was during Inspector General of Police Gambo Jimeta when the uniform was changed. And this is another landmark phase where the police infrastructure and welfare would be upgraded,” he said.

“If one is coming down the Madi road and asks for the direction of the Police station, the person would have passed here before realising it, because this is not an ordinary building. It does not look like our normal police stations.”

The Governor called on all public office holders to be innovative and always make impacts, saying the administration will continue to support the police and other security agencies.

“The emphasis should be placed on the need to improve and upgrade. When we are in a position we should leave it better than how we met it. That is what IG Alkali has done and continues to do by making sure that the facilities, infrastructure and welfare of the Police are his priority,” he added.

“I feel very proud that this type of facility is in Kwara State. I will raise it during our next Governors’ Forum meeting that whenever we want to assist the police in developing infrastructure, we should go with this model.

“And we in Kwara will also try and replicate this building in the years ahead. I visited some of the barracks and was not too happy with the way things are. We have done some things and we will do more. We know that the government is limited by the scarcity of resources, while also trying to allocate funds for all sectors of the economy.”

He appreciated the Police State Command and other security agencies for doing their best to keep Kwara among the safest states in the country.

The event was attended by the Inspector General of Police, Usman Alkali Baba; State Commissioner of Police Paul Odama; Senior Special Assistant to the Governor on Security Aliyu Muyideen; representative of the Emir of Ilorin and Balogin Alanamu of Ilorin, Abubakar Usman Jos; among other dignitaries and community representatives.

Alkali, for his part, said he was in the State to commission the Police station, which he noted was built to add more value to policing standards in the state.

“Your Excellency, this is one of the projects with which we feel we can add value to our policing in this country. We pray we can have more of this in the State and the Country at large,” he said.

He thanked Governor AbdulRazaq for his government’s investment in the security sector, and asked the host community to maintain the project.

“I also want to appeal that this edifice belongs to members of the public, and not the police. You need to protect it under whatever situations. It is here to serve you and provide security,” according to the super cop.

State Commissioner of Police Paul Odama, in his address, said the State government under AbdulRahman AbdulRazaq is giving the command necessary support and empowerment to excel in their task to protect lives and properties of Kwarans.

“Kwara State is a state of harmony, as such the Command is doing everything possible to make the State permanently harmonious. This effort is made possible by the support given to the Command by the government of His Excellency, Mallam AbdulRahman AbdulRazaq.”