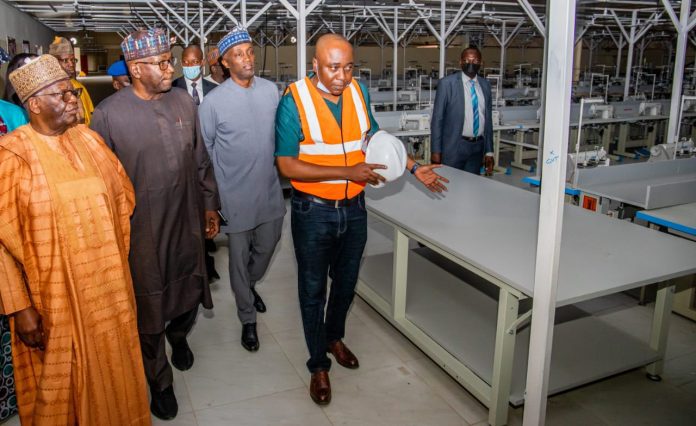 Chief of Staff to the President Ibrahim Gambari, at the weekend said Kwara State is recording impressive economic development under Governor AbdulRahman AbdulRazaq.

Speaking at the launch of the UNDP Econonic Revitalisation Programme in Ilorin on Friday, the retired diplomat said the Governor’s programmes and ongoing projects, including the garment factory, represent a positive economic development in the State.

Gambari’s attendance of the UNDP programme was preceded by his brief tour of the State garment factory and the office of the Kwara State Social Investment Programme where he also interacted with some applicants of the Kwapreneur 3.0 — an initiative to fund businesses of young people with non-interest loan and or grants.

“Let me thank His Excellency the Governor for the gracious hospitality he accorded us since we came. Before we came here, we have been taken round to see some of the programmes of economic development and empowerment for which the administration has become very known, including the Garment industry which will be an engine of growth and creator of wealth which will further reduce the poverty level in this state,” Gambari said.

“We have also seen first-hand some of these young entrepreneurs who were doing interview – some were even interviewed in our presence – who will benefit from the economic development programme (Kwapreneur 3.0) of his administration.

“He has demonstrated the possibilities of change or progress in our state.”

He commended the State’s social investment programmes which had been modeled after President Muhammadu Buhari’s famous safety net programmes.

Gambari also praised AbdulRazaq for partnering with the United Nations Development Programme on the cash transfer initiative that he said can change the lives and destinies of the beneficiaries if properly used.