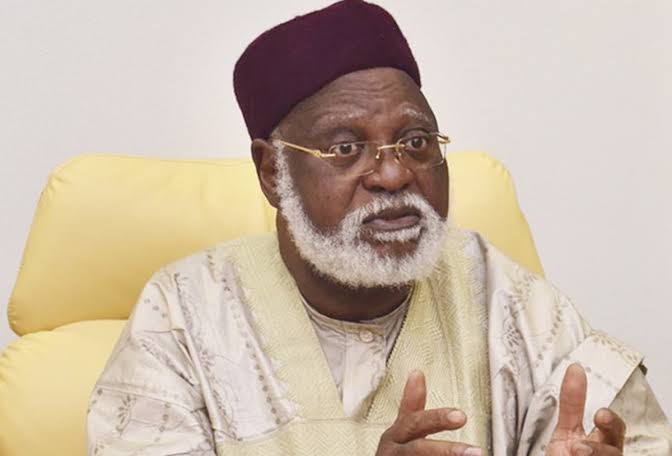 Former Head of State, retired General Abdulsami Abubakar unveiled a four-part book on crimes and insurgencies in Nigeria and other parts of the world on Wednesday in Abuja.

The series, which were titled: Preventing Crimes, Insurgencies and Desperate Migrations from developing nations, Africa, Latin America and other nations of the world written by Iliyasu Buhari Maijega.

Commending the effort of the author, Abubakar said the presentation of the series was timely considering the security challenges bedeviling Nigeria.

He noted that insurgency and other violent crimes had been confronting Nigeria in the last 10 years, adding that the violent threats had spread all over the country over time.

He said the book threw light into the root causes of insurgency, stressing that it would help security agencies and the government to find lasting solutions to insecurity in Nigeria and around the world.

Abubakar urged Nigerians and all stakeholders to read through the series with a view to understanding issues around insurgency and proffer solutions.

“I believe this book has thrown light into the root causes of insurgencies and I believe that it will help our security agencies and the government in tackling these challenges,” he said.

The author, Maijega said the abduction of Chibok School Girls and banditry in North West Nigeria inspired him to embark on research to unravel the root causes of insurgency and banditry.

He said that he found similarities in the causes of insurgencies across the world which led him to go beyond Nigeria and Africa into Latin America, Asia and Europe.

He stressed that many had thought that Europe, for instance, had no problem but in his research, he came to understand that every nation had its own problems.

“For instance, we knew the Soviet Union was one country, but ethnic issues split it into 16 countries.

“Yugoslavia was one country but ethnicity split it into six countries. So that means it is not only Nigeria that is having ethnic problems making each ethnic group wanting to have its own nation,” he said.

Maijega noted that poverty, weakness or lack of leadership were responsible for most insurgencies, adding that getting to the source or root cause of insecurity would help to solve the problem.

According to him, without knowing the cause of a disease or an ailment one cannot cure it.

“Nigeria’s population was only 45 million in 1960, but it is more than 220 million today, which means it has multiplied five times with multiplication of structures.

The author urged the government to always adopt dialogue in finding solutions to security challenges.

In the review read by the former Chairman, Association of Nigerian Authors, Abuja, Patrick Oguejiofor, Muhammed said it highlighted the impact of COVID-19, problems in businesses, health, education, travels, and international relations.

Muhammed added that the series also highlighted the activities of cattle rustlers, bandits, kidnappers, insurgents and militants and the social impact on the citizenry. (NAN)