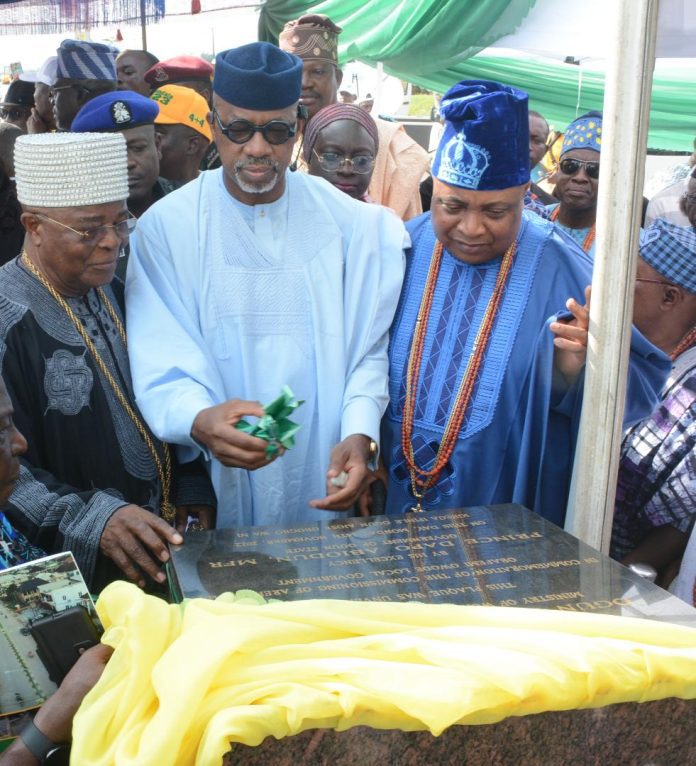 The Ogun State governor, Dapo Abiodun, on Monday, commissioned the 2.35km Arepo-Journalists Estate road, with a promise to continue espousing projects capable of making life more meaningful to people and residents of the state.

The governor, who described the road project as a remarkable one and his administration’s commitment to the provision of good governance in the state, noted that the completion of the road is a demonstration of his administration’s appreciation for the support of given by the people of Arepo Community.

While noting that genuine development should be people-oriented, Abiodun disclosed that the road leads to no fewer than 42 communities in Obafemi-Owode Local Government.

He recalled that he had promised during the electioneering towards the 2019 general election to fix the road if he was elected governor, expressing his delight that Arepo Road which had been in a bad state for years has finally been constructed.

The governor, who said the road was constructed with interlocking stones because of its swampy nature, added that other road furniture such as walkway, street lights and drainage, had been fixed on the road to make it durable and bring out its aesthetics.

Abiodun noted that the new road would reduce travel time, stress and vehicle maintenance of the residents of Arepo, declared that his administration would continue fix internal and external roads in the state, with a view to improving the socio-economic well-being of the people.

The governor added that the state government under his watch has embarked upon the construction of all arterial roads linking Ogun with Lagos state, emphasizing his administration is determined to raise the bar in road construction in few years to come.

“We are determined to raise the bar in road construction in few years to come. Our administration has has constructed most roads in Ogun Central, we will continue to look after the welfare of our people. We are determined to be fair and participatory; we will not development a section of the state at the expense of others.

“I want to assure you that we will complete all the uncompleted projects embarked upon by our predecessor in office, which have direct positive socio-economic well-being of our people, and we will continue to make life better for the people”, he submitted.

Abiodun, however, called on the residents of the community to take the ownership of the road, urging the youth not to be allowed to be used by the unscrupulous politicians before and and during the conduct of the 2023 general election.

Earlier, the Olu of Arepo, Oba Solomon Atanda Oyebi, thanked the governor for fulfilling his electoral promises by fixing the road which according to him had brought untold hardship on the residents.

On her part, the former Chairman of the Nigeria Union of Journalists, Lagos State Council, Mrs. Funke Fadugba, said that road completely cut off the Journalists Estate in Arepo, commending Governor Abiodun for ensuring the construction and completion of the road.

Meanwhile, the governor has assured residents of the Journalists Estate that his administration would embark on the construction of a modern primary health care centre to be completed in the next four months.

Abiodun while addressing the executive and residents of the estate at a parley after the inauguration of the Arepo Road, equally promised his administration’s support in the completion of the Civic Centre under construction in the estate.

The governor, however, called for the continued support of journalists in the quest of his administration to make take governance a notch higher.