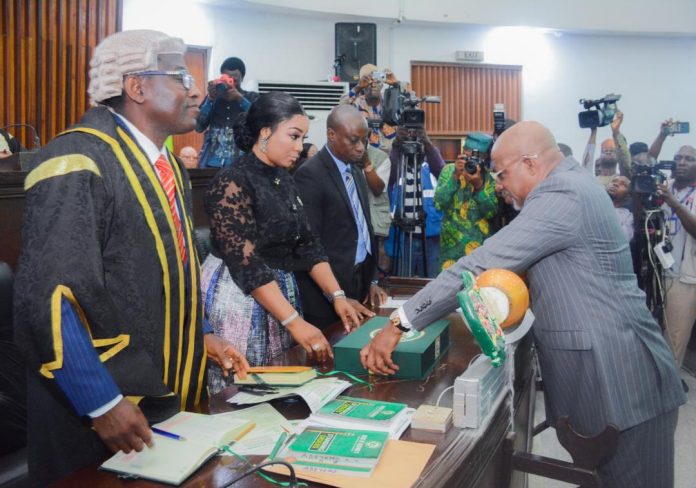 Ogun State Government has proposed a total expenditure of N472.25 billion for the 2023 budget, comprising N201.84 billion and N270.41 billion as Recurrent and Capital expenditures respectively.

The State Governor, Dapo Abiodun, who made this known in Abeokuta, during the presentation of the “Budget of Continued Development and Prosperity” to the State House of Assembly, said the 2023-2025 Medium-Term Fiscal Framework of his administration was hinged on the five development pillars of ‘ISEYA’ mantra.

Governor Abiodun while disclosing that his administration would continue to focus on improving its revenue base, added that in doing this, government would rely on the provisions of the section 23 (1 & 2) of the fiscal responsibility law, 2020 (as amended) with a view to increasing the State’s Internally Generated Revenue, alongside with the Medium-Term Revenue Strategy (MTRS), to drive its Medium-Term Expenditure Framewor.

Governor Abiodun while highlighting the 2023 key capital projects, said his administration would develop a Dry Port at Kajola to leverage on the existing rail network in the axis, adding that rehabilitation, reconstruction and maintenance of roads across the State, as well as the completion of Agro Cargo Airport and the construction of Pilot Rural Road of 13.1km at Alapako-Oni and Mosa Junction would be prioritised.

Meanwhile, the Speaker, Ogun State House of Assembly, Olakunle Oluomo, has said the last three years of the Abiodun-led administration had witnessed unprecedented development in all areas of human endeavour.

Oluomo stated this in Abeokuta at the presentation of the year 2023 Appropriation Bill christened, “Budget of Continued Development and Prosperity” by Governor Abiodun before members of the State House Assembly.

The Speaker, who highlighted the various legacy projects executed by the present administration to include, construction of rural, urban, intra-city and inter-state roads across the nooks and crannies of the State, Agro Cargo Airport, Remo Special Agro-Industrial Processing Zone, among others, said “the Governor is indeed worthy of the National Honour of the Best Governor in Industrial Revolution in Nigeria bestowed on him by the President and Commander in Chief of the Armed Forces of the Federal Republic of Nigeria, His Excellency, General Muhammadu Buhari, GCFR”.

According to Oluomo, “You have succeeded in ensuring that Ogun State maintains its pride as the educational capital and industrial hub among the comity of States in the Country. Without mincing words, the good people of Ogun State, the entire citizenry of Nigeria, and by extension the whole world are all living witnesses to Your Excellency’s ongoing monumental achievements and how you have been turning your dream for a prosperous Ogun State into reality”.

The Speaker noted that the Ninth Assembly had been maintaining cordial relationship with the Executive Arm of Government, which had reflected in the level of achievements recorded by the present administration since its inception in 2019, commending the State Governor for approving the release of fund for the year 2022 Constituency Projects in the State.

Responding shortly after the Governor’s presentation, Speaker Oluomo said the State deserved nothing less than a vibrant and articulate Legislature, an innovative leadership as the head of the Executive arm and a fearless Judiciary as being witnessed in the Gateway State through the various completed and ongoing projects, assuring that the Legislative arm would redouble its efforts towards retaining its pride of place among other States in the Federation.

He promised that the State lawmakers would ensure timely passage of the bill to facilitate the provision of the needed facilities that would add value to the quality of lives of the people.