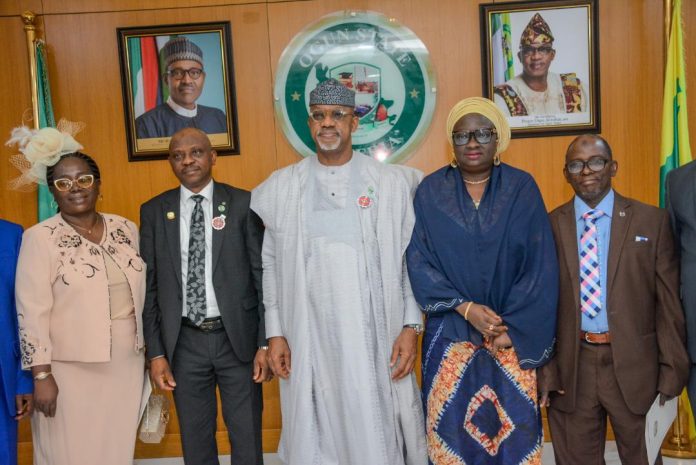 The Ogun State governor, Dapo Abiodun, has sworn in a Special Adviser and five newly appointed Permanent Secretaries, with a charge to them to bring in innovative, workable and 21st century ideas to move the public service and the state forward.

Speaking at the swearing-in ceremony held at the Executive Chamber of the Governor’s Office, Oke-Mosan Abeokuta, Abiodun noted that the new Permanent Secretaries were appointed without outside interference to fill the existing vacancies created by those who had retired from the service.

He pointed out that the public service is known for core values of integrity, discipline, loyalty and passion for excellence, noting the qualities have continued to make Ogun State public service stand out among public servants in Nigeria.

According to Abiodun, their appointments called for greater service and required a new mind set and high dedication.

“You need a higher dose of inter- personal relationship and emotional intelligence to manage your new offices”, the governor stated.

He, therefore, charged them to act as unifiers by bringing together the various departments and service wide in line with his administration’s development agenda to make life meaningful to the people.

He also urged them to be a bridge between the people and the service at all times.

“As you go into your new appointment, I hope you will not disappoint yourselves, family and the people of Ogun State whose trust is vested in you. You are to serve as standard bearers of the state public service as you interface between government and the public.

“You must guide jealously your defined roles without rocking the boat or compromising the expectations of this administration'”, Abiodun further charged them.

While appealing to relatives and friends of the new appointees to create the needed atmosphere for them to succeed, Abiodun equally pleaded with them to allow the appointees to adhere to the oaths of their new offices as well as ensure they carry out their assigned tasks, saying, “please, control and manage your expectations in a manner that will not allow them compromise their offices and integrity”.

He maintained that his administration was committed to the welfare of the public servants and remained unwavering in the development of all sectors of the state’s economy.

He added that a conducive ambience would be created for optimal development of the state and the people.

The administration, the governor added further, would continue to show commitment to improve and preserve the proud legacies of excellence left behind by the founding fathers of the state.

Abiodun emphasized that the progress of the public service depended on the quality of its leadership, hence the appointment of the high level officers to oversee and inject innovations, workable and 21st century ideas in the service.

While calling for continued support for his administration to provide more infrastructure and promote the wellbeing and wellness of the people, the governor called on the civil servants to continue to remain apolitical and neutral, ensure they get their Permanent Voter’s Cards to be able to exercise their civic duties in the forth coming general elections.