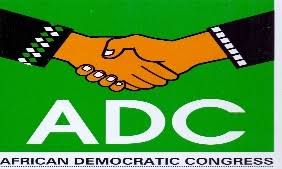 This was disclosed by the leaders of the party in the state, on Thursday, at a press conference, held in Abeokuta that recent developments in the state were indications that Abiodun is running a “draconian government.”

While speaking on behalf of the leaders, Iyabode Anisulowo, noted that the state government prevented the Council of Awori Obas, led by the Olota of Ota, Oba Adeyemi Abdulkabir Obalanlege from receiving their governorship candidate, Biyi Otegbeye.

Otegbeye was said to have scheduled a courtesy visit to the monarch at his palace, which was reported to have been cancelled a few hours before the meeting.

Anisulowo said the meeting was initiated to intimate the Council of his programmes but was called off without any justifiable reason.

“The intimidation by the Governor of Ogun State, Prince Dapo Abiodun, that led to the sudden cancellation of the planned visit of Barrister Biyi Otegbeye, the gubernatorial candidate of ADC to the Council of Awori Obas which was scheduled for today, is shameful.

“It is sad that our revered traditional institution which is the custodian of our culture and values is being trampled upon by Governor Dapo Abiodun.

“This harassment by Abiodun and his failed party (APC) is a sacrilege and a total desecration of the traditional institution.

“It is even worse that he decided to wield such draconian powers on Ogun West by preventing Yewa-Awori monarchs from receiving their own son on their land. As we speak, the same man is currently meeting with Obas in Ijebu-Ode just as he has been doing throughout the state. This is pathologically hypocritical and a double standard,” Anisulowo said.

She vowed that the party would resist any attempt by the governor to kill opposition parties in the state.

But reacting, the Commissioner for Information and Strategy, Waheed Odusile denied the allegation, describing it as a total falsehood.

“That cannot be true, it is not true. We don’t tell Obas what to do, that is definitely not true,” Odusile said.