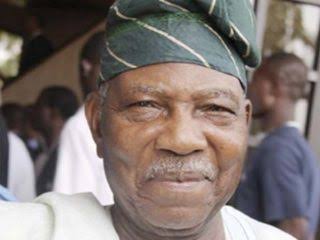 The leader of Afenifere, Reuben Fasoranti, has said that leaders of the group will no longer converge on Isoya Ogbo, Ijebu home of the acting leader of the Yoruba socio-cultural organization, Ayo Adebanjo.

According to the elder statesman, the meetings of the organisation will henceforth hold in Akure, the capital of Ondo State.

It was gathered that following the shifting of the meeting venue to the residence of the leader, Adebanjo may have ceased to be an acting leader.

He rejected the insinuations that he was paid to endorse Tinubu, saying that he has been a man of principle all his life.

Fasoranti said those who started meeting at Ogbo after naming Adebanjo as acting leader misunderstood and misinterpreted him.

Fasoranti lamented that the people shifted the meeting of Afenifere to Adebanjo’s residence because they felt he was becoming senile.

Fasoranti said some people felt he could not comprehend things, adding that the person who said that has regretted it.

However, Fasoranti said he is not senile, adding that “there is no shaking.”

“The reason the meeting was shifted was due to misunderstanding and misinterpretation of some people that I was going senile and that I cannot comprehend. When I heard that, I reacted and the person saying that regretted it”, Fasoranti said.

In a viral video of meeting at his Akure residence, Fasoranti said he will now communicate meeting schedules to Afenifere members after a liaison with the secretary and other leaders on the meeting agenda.

He maintained that most Afenifere chieftains have said they will not go to Ogbo for meetings again.

Following the return of the meeting venue to Akure, many Afenifere chieftains have concluded that Adebanjo has ceased to be an acting leader.

Adebanjo had earlier said the group endorsed Peter Obi as its preferred candidate for the 2023 presidential election.

But while reacting to the claim, Fasoranti said in an interview on an online television on Tuesday that Afenifere has not endorsed Obi.

He also insisted that he remains the leader of the group, as he also dismissed the claim that Adebanjo warned him not to receive the former Lagos governor.

He said, “I’m still the leader of Afenifere. Afenifere has not endorsed Obi, we are endorsing Jagaban (Bola Tinubu) for the presidency.

The Point recalls that in March 2021, Fasoranti stepped down as Afenifere leader, citing old age.

He also named the deputy leader, Adebanjo, as the acting national leader of the group, while the former financial secretary, Oba Oladipo Olaitan, the Alaago of Kajola Ago in Atakumosa East Council Area, Ilesa, Osun State, was named the group’s deputy leader.

Fasoranti had said: “The development became necessary as the group needs, more than ever before, to have an improved organisation with a more effective approach to combat the monstrous invasion of our culture and pride as a people.

“Only a more alike and active leadership can achieve this. At 95 I am hardly able to provide such and so it is time for me to step aside.

“At this junction, I am proud to announce Chief Ayo Adebanjo, a politician of the Awolowo school of thought, as Acting leader of Afenifere and Oba Oladipo Olaitan, the Alaago of Kajola Ago in Atakumosa East Local Government Area, as the Deputy Leader.”