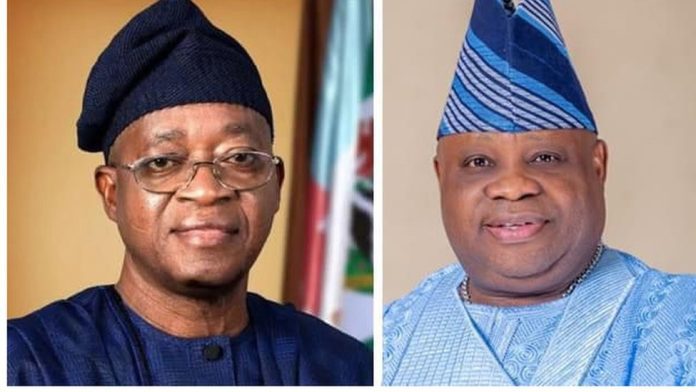 The Governorship Election Petition Tribunal sitting in Osogbo has slated Friday, January 27 for the delivery of its judgement on a petition brought by the immediate past governor of the state, Gboyega Oyetola and the All Progressives Congress against the victory of Ademola Adeleke of the People’s Democratic Party.

This was contained in a letter signed by the tribunal secretary, David Umar and pasted at the board of tribunal sitting at the premises of the State High Court, Osogbo on Tuesday.

Parties involved in the suit confirmed that the tribunal communicated the date to them on Tuesday even as the notice has heightened anxiety in different quarters.

APC leadership in the state had asked its members to embark on fasting and prayer for the judgement to favour Oyetola and the party.

The PDP had said Adeleke was massively voted by the people of the state and that the will of the people would prevail at the court.

The Point recalls that the 180 days stipulated in the Electoral Act within which to hear the petition is expected to lapse on January 31, 2023.

APC governorship candidate in the July 16 governorship election, Oyetola, had alleged that there were over-voting in some polling units and that Adeleke presented questionable academic certificates to the Independent National Electoral Commission in the build up to the poll.

The three-man election petitions tribunal headed by Justice Tersea Kume had on January 13 adjourned indefinitely for judgement after parties in the petition adopted their final written addresses.

Meanwhile, Governor Ademola Adeleke has urged the people of the state not to panic over the announced date for judgment against his victory at the July 16 governorship election in the state.

The governor, who spoke through one of his media assistants on Tuesday, Oluwaseyi Adeniyi, expressed confidence that the judgement of the Osun Election Petition Tribunal would favour him.

Adeniyi, during an interview on a radio programme, said, “Osun people have spoken, they massively voted Senator Adeleke, hence there is no cause for alarm.

“The government of Oyetola was a serving administration when the people of Osun rejected it, what other validation do we need to justify that Adeleke won by landslide?

“I told the people of Osun not to worry that their government is in safe hands. Ours is to rejoice,” he said.