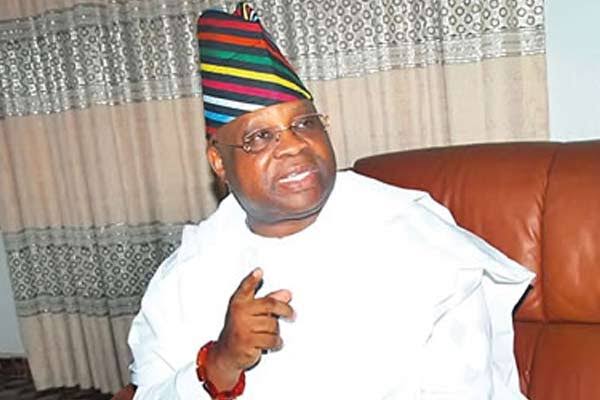 The All Progressives Congress in Osun State has claimed it got wind of an alleged concluded plan by the state governor, Ademola Adeleke and the ruling People’s Democratic Party to gag, massively arrest and attack its leaders and members in the state before the 2023 general elections.

According to the Acting State Chairman of the APC, Tajudeen Lawal, in a statement issued in Osogbo on Sunday, the governor’s strategy was to muzzle voices of the opposition before the polls by conniving with the leadership of the state police to transfer the Divisional Police Officers across the state.

But, PDP, while denying the allegations, chided APC for its reprehensible and persistent blackmail against the party and security agencies, clarifying that the PDP has nothing to do with internal operations of the Nigeria Police.

The APC statement read, “It was reliably gathered that a meeting was held in Ede between the leadership of the police and the handlers of Governor Adeleke where it was agreed that all the District Police Officers (DPOs) in the state should be transferred.

“It was learnt that a bossy female member of the governor’s family presided over the meeting where the plan to transfer the DPOs was hatched and concluded.

“Our intelligence indicates that the idea behind the concluded plan to orchestrate the massive transfer of the DPOs is to give room for some pliable and compromised police officers who could accede to any illegal order of arrest of any member of the opposition.

“Information has it that quite a sizeable number of the serving DPOs have been questioning the reason why they should be made to go after and arrest any member of the opposition for no just cause.

“Barring any change of plans, it was learnt that the massive transfer of the DPOs would be kick-started (on Monday) while the new compromised ones have pledged their loyalty for readiness to act according to any directive from either the governor or the leadership of the PDP in the state.

“It was also learnt that another reason for the Osun PDP and Adeleke to be scheming towards the mass arrest and attack of the APC leaders and members is to create fear into the opposition and their supporters to flee the state before the general elections,” the statement added.

Lawal further said, “This is a serious problem that we are contending with which is capable of adding to the political upheaval in the state where the members of the opposition and their supporters are being attacked by suspected PDP thugs for no reason.

“We have the privileged information that the DPOs are to be transferred massively in order to give way to the compromised ones who would always be ready to carry out any illegal orders of Governor Ademola and the PDP.

“We are appealing to the IGP to call the Osun CP to order. We are equally appealing to the other sister security agencies in the state to discharge their statutory duties with neutrality and desist from any assignment capable of impugning the image of their outfits.

“It is our resolve that acceding to illegal arrest of any of our members and leaders is an invitation to anarchy which will not do anyone any good.

“Must the PDP hinge the harassment, subjugation, attacks, killings of the APC members on the presidential electoral success of Alhaji Atiku Abubakar, the PDP candidate?”

“In order to corroborate our allegation and fear, some of our members were invited by a section of the statutory security agencies in the state over their remarks in the social media just last week,” he alleged.

Reacting to allegations from the APC about alleged plot to redeploy DPOs, the PDP in a statement by its State Chairman, Adekunle Akindele, accused the APC of leveling baseless allegations, refuting allegations that a family member of the state governor or the PDP as a party is dictating the redeployment exercise.

Akindele pointed out that the police has its operational codes which PDP has no power to influence, wondering how PDP can control a police service under the control of the Federal Government.

Positing that police normally redeploy officers during election period, the PDP corrected the misinformation from the APC even as it alleged that the APC was already afraid of eventual defeat at the February elections.

“Ever since the APC lost the July election, the party has grown paranoid and regularly engages in the manufacturing and distribution of fake news.

The opposition sinks deeper into despair and confusion, leading it to churning out illogical lies and confusing postulations. What has PDP got to do with police redeployment? Or is APC afraid its secret rigging machines are about to be dismantled?

“Our message to APC and its fake news manufacturing operatives is that Osun people are wiser. The APC was voted out of power in Osun State because it lost any element of credibility due to its elevation of propaganda as the main tool of state governance. Stop blackmail as defeat awaits your candidates in forthcoming elections,” Akindele said.