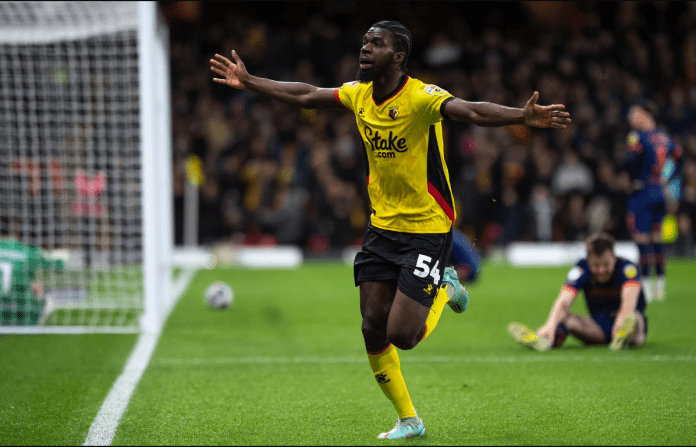 Tobi Adeyemo made a goalscoring home debut for Watford as they secured a 2-0 win over Blackpool in a Championship clash at Vicarage Road at the weekend.

Four minutes after coming off the bench to replace Vakoun Issouf Bayo, the second year scholar broke the deadlock as he pounced on the rebound and fired home after Maxwell had parried away a shot from Martins in the 72nd minute.

It was Adeyemo’s second senior appearance for the Hornets and it came a week after he featured as a substitute for the last fifteen minutes of a 2-0 loss to Reading in the Emirates FA Cup.

The 17-year-old has revealed exactly what manager Slaven Bilić told him before he stepped out onto the Vicarage Road Stadium turf for his Championship debut.

A delighted Adeyemo said: “Slaven Bilić told me that I was here for a reason, and that he wanted me to go out there and show what I can do.

“I just want to thank Slaven so much for giving me the opportunity – I’m just so grateful.”

Adeyemo admitted that he was awestruck after opening the scoring for Watford and revealed the reason behind his goal celebration.

After scoring, he ran over to celebrate with his academy teammate Jack Grieves, who also made his home debut for the Hornets against Blackpool.

“The ball came out after the Blackpool goalkeeper parried it, and I said to myself ‘I’m going to get my foot on this, I’m going to score here’.

“I can’t describe the celebration. It’s terrific, absolutely terrific. Grieves, what a legend, I love that guy. Seeing him from the Academy and being on the pitch together at the same time is different class.”