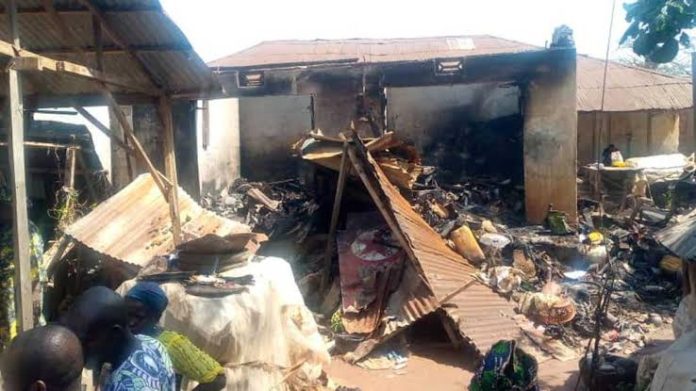 The affected shops were mainly occupied by local herb sellers.

The two different storey buildings stocked with furniture materials and assorted electronic gadgets were destroyed by the fire said to have been caused by electricity surge.

The inferno started around 1 a.m. and destroyed goods worth several billions of naira.

Governor Gboyega Oyetola had visited the scene after the inferno to commiserate with the shop owners and directed that one of the affected buildings be pulled down.

One of the victims of the latest fire disaster, Ishola Olalekan, while speaking with The Point at the scene of the incident, said his shop was razed down and that wares including herbs, animal skins, cowries among other native items were destroyed.

Olalekan said the fire started at about 1:00am but his attention was called to it around 3:00am.

He added that a vigilante personnel who was watching the market had discovered the fire when it broke out before he raised the alarm.

Olalekan said, “The fire had started before I got there. No one can say the exact cause because no one was there when it started. I heard that some vigilante personnel saw the fire when they were passing by before the attention of the fire fighters was called.

“My shop is part of those that got burnt. I sell animal skin, cowries, and other things that have been prepared for use by my customers. There are items I sell to foreigners and I have like 12 of them prepared and each of them costs N130, 000 apart from the cowries and animal skin that I haven’t used. There is a soap there I prepared which was ordered from Brazil.

“All the items that got destroyed cost more than N100 million. Most of my customers are angry about this sad incident because their herbs had been destroyed. We thank the firefighters for arriving at the scene on time. We want the government to assist us,” he pleaded.

Another victim, Kudurat Ganiyu, lamented the incident saying goods worth millions of naira got destroyed.

Babalola Oyebode, a provision seller whose shop was not affected, said the inferno destroyed properties and goods worth several millions of naira.

“The fire started from one of the shops before it transferred to the others. Total of nine shops were burnt before the fire service arrived. I think the fire was caused by an electricity surge,” he said.

The spokesperson of the Fire Service in Osun State, Ibrahim Adekunle, confirmed the incident, saying that several properties had been destroyed by the inferno before the arrival of his officials who got to the scene three minutes after they were informed.

Adekunle, who did not give the cause of the inferno said: “The fire was suspected to have started some hours before the men of Osun State Fire Service, Okefia Station were informed through one Mr. Oyedele Muftau who visited our station.

“The fire had already destroyed properties worth millions of naira and buildings damaged before the Fire Service was informed.

“However, quick intervention of the firemen who got to the scene three minutes after they were informed salvaged some properties as well as prevented further spread to the adjoining developments.”