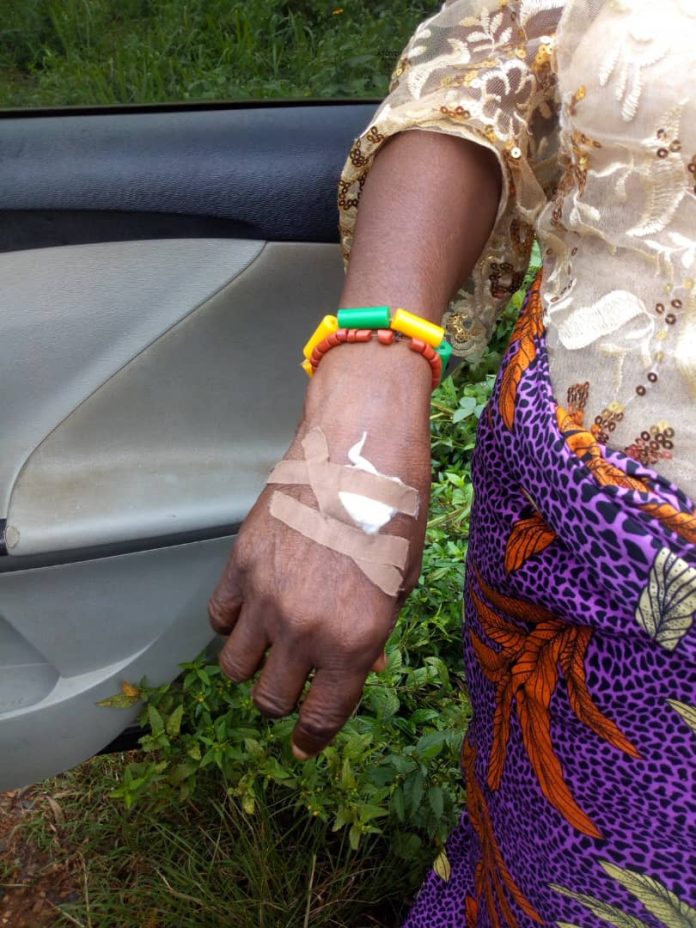 Oba Aderibigbe Omirin of Kajola-Ijesa in Atakunmosa West Local Government Area of Osun State, and the Babaloja of the community, Tunde Adeniran, have been accused of brutalizing and extorting two women, namely Iyabo Adegboku and Rukayat Azeez.

Adegboku, the Iyaloja of the community, and Azeez, a cleaner, alleged that they were brutalized by Adeniran on the orders of the traditional ruler.

According to Azeez, problems started in the market when the traditional ruler insisted that she should pay the sum of N70, 000 as charges for operating in the community market.

It was alleged that the king takes money and food items for free from his subjects as a pre-condition to granting them permission to operate in the market.

The cleaner, who claimed that she borrowed some money from a cooperative group to pay her dues to the monarch sometime in July this year, expressed shock that the Omirin insisted that she should pay the annual dues for the second time in the year.

She said that she resisted the pressure by the Babaloja to pay the annual dues for the second time as demanded by the king because it would amount to cheating for her.

As a result of this, she said that the Babaloja beat her up and tore her clothes at the market place.

Azeez said that “I have been working as a cleaner at the Kajola-Ijesha market for about 10 years now without any problem. But since the ascension of Omirin in our community, we have not had peace at the market. I clean the market with the support of other cleaners. Traders do give me between N10 and N20 just to encourage me. I have never forced anyone to pay me. The Omirin asked me to pay the sum of N70, 000 every year.

“This has been my headache because I don’t have it. How much am I realizing? But in order to avoid trouble, I got a loan to pay the money and God has been assisting me. I Paid him (Omirin) the sum of N70,000 for this year with the loan that I collected from the Akunamatata lending group.

“I paid the money on July 20, 2022, but a few days ago, he sent two Chiefs, Baba Bidemi and Baba Titi, to get money from me. I told them I didn’t have money and that I had to get a loan to pay him for this year. I said that I couldn’t pay the money twice a year. I learnt that the monarch is trying to erect the fence of his palace that collapsed and this is why he has been disturbing me for money.

“On October 18, Tunde Adeniran came to where I was sweeping and dragged the broom with me. He beat me and tore my clothes. It was Baba Ilori and some other men that rescued me. Before I got to the Kajola Police Station with my torn clothes, he was already there. I later went to the hospital to treat myself because I hit my chest on the ground.

“While I was receiving treatment at the hospital, the police came to arrest me from the Ayeso Police Station, Ilesa. They put me in their custody and released me two days after due to the intervention of human rights activist, Citizen Lola Wey.

Narrating her own ordeal, Adegboku accused Babaloja of assaulting her around 8am on October 20, right in front of the public.

She said that she sustained injuries on her hand in the process leading to her being hospitalized at the Kajola-Ijesa Health Centre.

Adegboku stated that “Omirin subjected me to suffering. We have not been selling well at the market because of the incessant police arrest and court cases. He appointed a new Iyaloja and I kicked against it so he got me arrested by the police.

“Last week Thursday, my yam was stolen in the market and it was reported to me. While I was trying to sort the matter, the Babaloja came and started accusing me of disrespecting the Omirin. He slapped me and held onto my clothes. I have not been feeling fine since then after being treated at the health centre. We need peace in Kajola-Ijesa and we want the stakeholders to intervene.”

Meanwhile, the Omirin was said to have petitioned the police, accusing the market cleaner of threatening him. The monarch claimed that the woman had sworn that he (Omirin) would not live to see the month of November.

It was learnt by our correspondent that it was in response to the petition that a team of security operatives from the Ayeso Police Station stormed the hospital where Rukayat was receiving treatment. She was later released to her daughter after the intervention by Wey.

In an interview with The Point, Babaloja however denied the allegation that he assaulted the women, saying that they were notorious liars and troublemakers in the community.

Adeniran said, “I didn’t touch any of them. The day Rukayat abused me, I didn’t even touch her. She denied at the police station that she abused me and that it was another person that she was referring to. She used to curse me and the Omirin each time she saw our children.

She told the police that I beat her up and tore her clothes. If you ask other residents, they would confirm to you that she is a troublemaker.

She misbehaved with the Kabiyesi (the Omirin). She bought palm oil at the marketplace using Kabiyesi’s name. That was why the Kabiyesi banned her from the palace.“

Rukayat, in an interview, denied the allegation, saying that the king sent his son to collect palm oil from the traders.