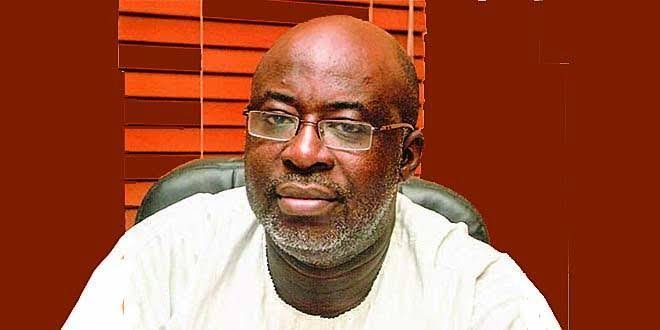 Says State FAs will be empowered for grassroots development

Current first Vice President of the outgoing Nigeria Football Federation board and top contender for the post of President in the coming September 30 NFF elective Congress, Seyi Akinwumi, has reiterated his resolve to run an inclusive administration if elected to preside over the affairs of the country’s football. The Congress will hold in Benin City, Edo State.

Akinwumi gave the assurances in a telephone interview over the weekend during which he stated that a sincere focus on the grassroots football will bring a positive turn around to Nigeria’s football roadmap and enhance long awaited development.

Asked the areas he will concentrate when he emerges as the next NFF President, Akinwumi said, “First of all when I emerge as the next NFF President, I think the most crucial thing is to stabilize the system and to stabilize the system is to run an all inclusive administration, essentially to give everybody the confidence that there would be on football family in Nigeria where everybody will be included. So issue of inclusion and making sure people having the confidence about what we say we will do. I think it’s the first thing I am intending to look at.”

Akinwumi, who is also the Chairman of Lagos State Football Association, maintained that inclusive administration where every football stakeholders will be comprehensively involved will eliminate bikerings in all quarters of the sport from people who feel they are barricaded from the affairs of the sport.

“We have now for example people who are going to Court, we have people who feel in the past few years they have been excluded, rightly or wrongly, they feel that way, we needed to ensure that everybody feeling that way we ought to all face same direction to develop our football and if that is the case that will take o lot of hard work as the effect of what we will do before we go into any other thing else.”

On how he will go about realising the set goals, Akinwumi disclosed “I intend to call everybody, speak with everybody as I have been doing this moment, that is to make everything stronger more than the President of the NFF”.

The LSFA Chairman also disclosed the secret of various successes recorded within his tenure and noted that his plans for football are premised on four cardinal areas, namely football development, business of football, football infrastructure and football technology.

“Again I feel that what I will do when I become President is very simple. We need to change the way football is at the moment. Not because anybody has got anything wrong but in my opinion, for us to meet the challenges that we have in the ecosystem we have now, if I mention systems that we associate ourselves with now, we need to change somethings. The first thing I have which is contained my ideology is what I called football first.

“For us to get people put money in our football, we need to show that we have properties that they will put their money in and get returns from. They need financial returns directly or indirectly because nobody wants to do business and not get any returns. So what do I do. The first thing is to change the system from top bottom to bottom top which means now we have the FAs doing the grassroots work.

“I have said severally that once the FAs are the ones doing the grassroots work we can change football because we will give them money from the NFF. We will budget for each of the FAs and then they’ll have specific things to do which will lead to keeping eyes on them. And until we do those things after the first three months, they get the next cut of payments. It’s in that system we get to know what happens to the grassroots,” he said.

Speaking further, Akinwumi said his administration will not base on sponsorship alone to develop football in the country. “We have to ensure we have the business of football inculcated in our system. So we don’t talk about sponsorship alone. Sponsorship will be the icing on the cake. We have people who will invest in football because they are making profits from football. That’s the only way we can be sure that football can be sustained in this country.”

Akinwumi, member of the Presidential 10 years master plan for football in Nigeria assured that he will inculcate his ideology in the master plan to take football to the pinnacle when he emerges the NFF President by ensuring that football development originates from the state level to the national and not otherwise.

The FA Boss argued that implementation of the bottom up administration will eliminate dichotomy in football administration in Nigeria and make the football family one large indivisible family that would be devoid of aggrieved parties that will seek redress in Court.

He expressed confidence that the September 30 elective Congress will hold despite a Court injunction as he believed the matter that led to the Court involvement in the NFF election will be settled before the elections.

According to him, “I have no reason to believe that it won’t go on because I feel that even those who went to Court, I like to think that they are frustrated for some reasons or the other but being that they also know that if there is no stability in the system, even they cannot do the business of football that they do. So, I am very hopeful that between now next few days that matter would be resolved.”