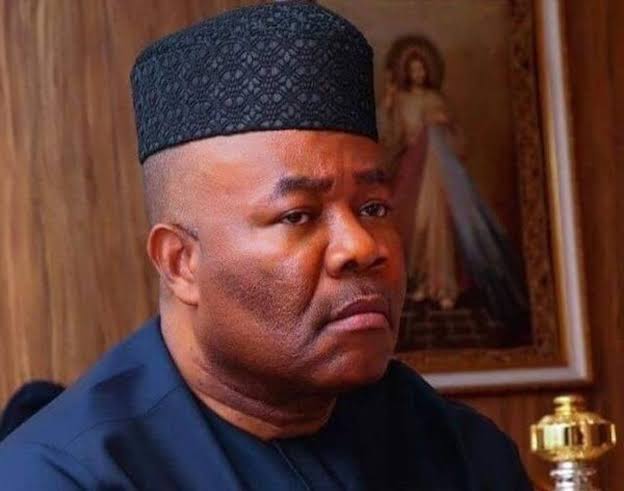 The Independent National Electoral Commission maintained on Monday that a retired Deputy Inspector General of Police, Udom Ekpoudom, remains the candidate of the All Progressives Congress for the 2023 election in Akwa Ibom North West District.

The electoral umpire denied a newspaper report on Monday stating that it had replaced Ekpoudom’s name with that of a former Minister of Niger Delta Affairs, Godswill Akpabio.

“The attention of the Commission has been drawn to reports widely circulated by a section of the media today (Monday) that the final list of candidates was released on our website on 8 January 2023.

“The Commission wishes to state categorically that no new publication of the final list of candidates was released as reported. The public should therefore discountenance the story,” Festus Okoye, the INEC spokesperson said in a statement on Monday.

The Commission explained that it only posted a statement on its website that it has amended the candidates’ list in compliance with the court order it has been served.

“By virtue of the provision of Section 287 of the Constitution of the Federal Republic of Nigeria, 1999 (as amended), the Commission is bound to enforce the order of the Court on the nomination of candidates by political parties in the affected constituencies.

“Consequently, the list of candidates in respect to the attached senatorial districts and Federal Constituencies, Governorship and State House of Assembly elections are amended to the orders of the Court served on the Commission as of 21 December 2022 for upload on the Commission’s website.

A check on the Commission’s website showed that Ekpoudom is still the APC candidate for Akwa Ibom North West District.

Akpabio was the candidate of the APC for Akwa Ibom North West until his election was nullified by the Court of Appeal on November 14, 2022.

The appellate court had set aside a judgement of a Federal High Court in Abuja which had ordered INEC to publish the former minister’s name as the APC candidate for the district.

Akpabio was one of the aspirants for the June 2022 APC presidential primary in Abuja.

He stepped down in the middle of the exercise for a former governor of Lagos State, Bola Tinubu, who eventually won the primary.

After the APC presidential primary, Akpabio suddenly emerged as a “winner” of the party’s senatorial primary in Akwa Ibom under controversial circumstances.

Akpabio has filed a suit at the Supreme Court challenging the judgement of the Court of Appeal. The apex court is yet to decide on the appeal.

The court said the APC governorship candidate, Akan Udofia, was not a member of the party, and therefore disqualified him from participating in a fresh primary which the court ordered.

Also in Akwa Ibom State, the warrant of arrest issued against Umo Eno, governorship candidate of the People’s Democratic Party has been served on the Inspector General of Police.

He is now expected to effect the arrest.

A chief magistrate court in Wuse zone 6, federal capital territory had ordered the arrest of Eno on December 23, 2022.

Emmanuel Iyanna, senior magistrate, issued the warrant after convicting the governorship candidate on charges bordering on “cheating and dishonestly inducing delivery of property”.

It was confirmed that Eno had failed to attend proceedings hence the trial was conducted in his absence, leading to his conviction.

The complainant in the suit marked CR/94/2022 is one Edet Godwin Etim.

However, Eno’s campaign organisation has denied knowledge of the suit.

In the warrant of arrest, the senior magistrate said: “You are hereby directed to arrest the said pastor Umo Bassey Eno and produce him before me.”

The warrant has been served on the IGP via the Commissioner of Police (Legal).

An acknowledgement copy was stamped “received” on Monday, January 9.

Eno, who is the preferred candidate of Udom Emmanuel, governor of Akwa Ibom, won the party’s primary held in May 2022.

He secured 993 votes, while a total of 1,018 delegates participated in the election.