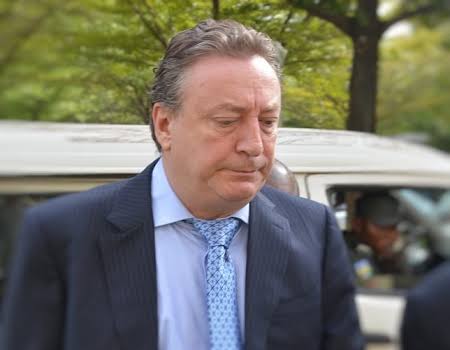 A Federal High Court in Abuja, on Wednesday, revoked the N100 million bail granted to a Briton, James Nolan, a director in the Process and Industrial Development Limited.

Justice Ahmed Mohammed, in a ruling, issued a bench warrant against Nolan.

Justice Mohammed ordered that the British national should be arrested by security agencies, including the Interpol, anywhere he is sighted within or outside Nigeria and be produced in court to stand his trial.

“As far as this court is concerned, the absence of the 2nd defendant (Nolan) in court implies he has jumped bail.

“The bail is hereby recalled and a bench warrant is issued against the 2nd defendant,” he ruled.

The judge also directed that the surety, George Kadiri, a retired civil servant living in Gwagwalada, Abuja, should appear in court in the next adjourned date to show cause why his bail bond should not be forfeited.

Mohammed consequently adjourned the matter until November 3 for hearing.

The judge gave the order following an oral application made by counsel for the Economic and Financial Crimes Commission, Bala Sanga, to the effect.

While Lurgi Consult Limited is the 1st defendant, Nolan is the 2nd defendant in the matter.

Nolan, alleged to be at large, is also standing trial in about eight other cases for his involvement in the $9.6 billion controversial contract awarded to P&ID.

While eight of the matters are before FHC in Abuja with six of the cases before Justice Mohammed, one case is before an FCT High Court.

Sanga, upon resumed hearing in the matter, told the court that Nolan, who was standing trial, had jumped bail.

He said though the agency’s 1st prosecution witness, Tope Erinomo, was in court, Nolan was not.

“However, we were informed that the 2nd defendant has jumped bail while the 1st defendant has never been represented in court as a corporate body,” he said.

He, therefore, said that he had about five applications to make.

He said there had been a deliberate attempt by the defence to frustrate the case ever since Nolan was admitted to the N100 million bail by a brother judge, Justice Okon Abang, after the defence appeal the bail terms earlier imposed.

“But now, he is not in court today. The substantive $9.6 billion suit will be starting in London,” he said.

Sanga said after Nolan met the bail conditions, the EFCC investigated the property used as the bail bond in Gwagwalada and discovered there were inconsistencies in the subject of the bail bond.

He informed that the property did not worth the N100 million required either at a forced sale or open market value.

The lawyer said though the surety claimed that Nolan was a family friend in the affidavit of means he deposed to, he later revealed that he did not know the Briton but was only offered N1 million to stand as his surety.

He said that there was video recording evidence to the effect.

But Nolan’s counsel, Michael Ajara, said it was not in Sanga’s place to raise such issues at this time.

“The court should hear us out,” he said.

Michael, who held the brief of Paul Erokoro, SAN, stated that Nolan, since the commencement of his case, had always been in court, even in other matters where he was standing trial.

He, however, said that his client’s “mysterious disappearance” had kept them wondering on what could have happened to him.

“The last time we saw him was on 21st of June before your learner brother,” he said

The lawyer informed that Nolan told his principal that he had been suffering from a disease called Bipolar disorder and that he would be going to a Lagos hospital for a medical attention.

He said since then, his phone number had been unreachable.

“We went to the prosecution and the police. We have been doing something,” he said.

According to Ajara, my principal even went to London as part of the efforts to know his whereabouts.

He said a brother judge, Justice Obiora Egwuatu, where his client was also standing trial, on Tuesday, adjourned the matter to November 9 so that they could liaise with the police and report back to the court about his whereabouts.

Responding, the judge said all the explanations by Ajara led to a conclusion that Nolan was nowhere to be found.

“Whether the disappearance is justified by law, you cannot say because you don’t know his condition.

“What is apparent is that he is not in the dock.

“What do you want the court to do now if you are the one sitting here?” Mohammed asked.

Ajara then prayed the court to give them a little time to ascertain Nolan’s whereabouts.

The judge also asked Kadiri, the surety, if he knew Nolan’s whereabouts but he responded in the negative.

Justice Mohammed held that there was no evidence to justify the disappearance of the defendant.

“As far as the law is concerned is to issue a bench warrant against him,” he said.

If his disappearance is justify by law, then the law can be bent after seeing him.

He said the law is that if a defendant is not in court and no reasonable explanation is giving, the court has the discretional power to issue a bench warrant.

“I am not bind by any previous decision of anybody,” he said.

The judge, who said that the law is not by conjunctures and assumptions, said: “It is by evidence.”

Addressing Ajara, he said: “That application is out of place. If I grant that, it will be a misapplication of discretion.”

Sanga, in his oral application, then prayed that Nolan’s bail be revoked and a bench warrant issued against him.

“Thirdly, the surety should be summoned to show cause why he should not forfeit the bail bond,” he said. (NAN)