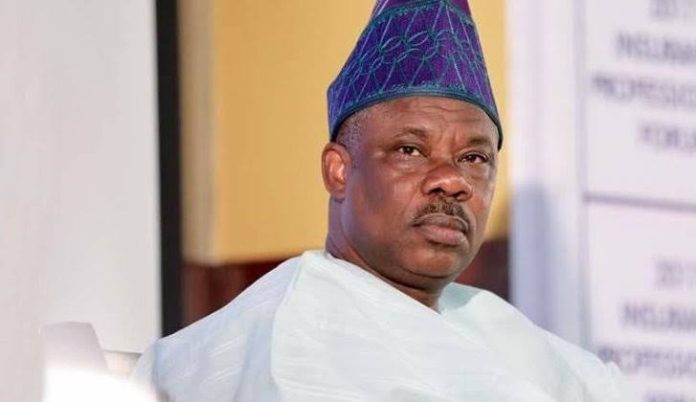 The immediate past governor of Ogun State, Ibikunle Amosun, has dissociated himself from media reports, claiming that he has entered into a political deal with the People’s Democratic Party in the state and its governorship candidate, Oladipupo Adebutu.

Amosun, in a statement signed on his behalf on Sunday by Bola Adeyemi, stated that the report is false and malicious, saying he has no agreement with either Oladipupo Adebutu or the PDP in Ogun State.

“This story is nothing more than a mischief to mislead the public and discredit the hard-earned reputation of the former governor of Ogun State.

“We have stated before and wish to state once again, categorically, without any fear of contradiction that, Senator Ibikunle Amosun, has nothing to do with the PDP in Ogun State.And he is not a party to any alliance formed with anyone or group of persons in the party. The public is advised to dismiss the report,” the statement stressed.

The alliance agreement titled, ‘The Alliance Agreement between Dr Oladipupo Olatunde Adebutu and Adekunle Abdulkabir Akinlade in respect of the 2023 elections into the Officer of Governor, Deputy Governor, related elective positions and appointments in Ogun State, Nigeria’ was signed by the duo.

In line with the terms of the agreement, Adebutu and the PDP shall “concede the position of deputy governor, Ogun West Senatorial ticket, two State House of Assembly Tickets (Ogun Central) to Akinlade and his APM group.

The agreement was deposed by an oath at the High Court of Ogun State, Abeokuta, dated September 16, 2022.

It was also witnessed by the state PDP Chairman, Sikirulai Ogundele, and the Secretary of the party in the state, Sunday Solarin.

“That Hon. Adekunle Abdulkabir Akinlade, besides his constitutional role as the Deputy Governor, shall be appointed in a ministry that shall be created to drive new investments, improved revenue growth and development of the state, provided the Deputy Governor shall report directly to the executive governor in accordance with extant laws in relation to his official duties and functions of his office as deputy governor and Honourable Commissioner for Trade and Investment.

“In furtherance of the Clause A and B hereinabove, Hon. Adekunle Abdulkabir Akinlade shall mobilise and deploy his political capital, groups and other resources of the PDP, particularly to the office of the Governor of Ogun State.

“He shall equally support, assist and promote the political interests of Adebutu and the PDP at all times.

“Each party shall not be a party to any other agreement that would restrict the Parties’ ability to perform any or all of their obligations as set forth in this agreement.

“In the event of any dispute between the parties with reference to this agreement or any matter arising hereunder, the parties shall resolve the same by amicable negotiations,” part of the agreement read.