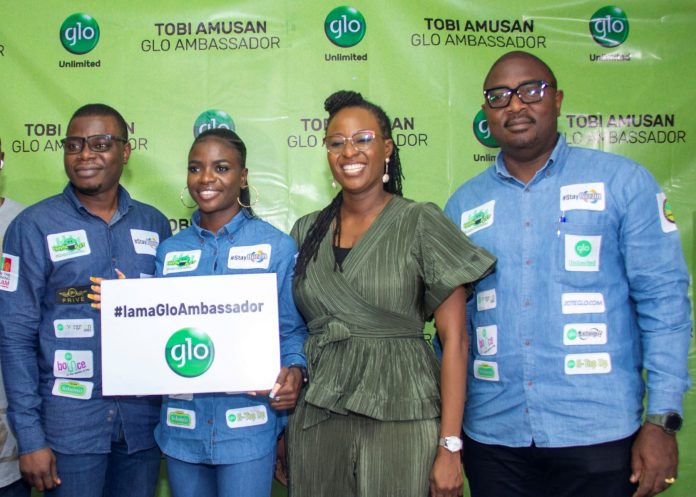 The current African, Commonwealth and World Champion in the 100m hurdles, Tobi Amusan has assured sports fans that she will judiciously use her position as Glo Ambassador to encourage upcoming youths to embrace sports.

She revealed this while speaking to The Point at her unveiling ceremony as an ambassador of Nigeria’s leading digital and telecommunications services provider, Globacom, which took place at the company’s headquarters, Mike Adenuga Towers, in Victoria Island, Lagos.

Amusan became the first Nigerian world champion in an athletic event when she won the gold medal in the100 metres hurdles event at the 2022 World Athletics Championships. She set a new world record of 12.12 seconds in the semifinal, and followed this up with 12.06 seconds in the final to take the gold medal.

“At Globacom, we are very proud of what Tobi Amusan has achieved in her athletics career. She is an embodiment of the Nigerian spirit of resilience, hard work and enterprise which enabled her to excel irrespective of the enormity of the challenges she encountered in her quest for success. These are qualities that Globacom identifies with,” said Lawrence Odediran, Globacom’s Regional Manager, Sales, Lagos who represented the company at the event.

He said that the company’s decision to make Amusan its ambassador was not just to reward her for her sterling accomplishments, but also to promote the growth of sports in Nigeria and encourage the country’s teeming youths to aspire toward realising their dreams by looking up to the new ambassador as mentor.

Describing Amusan as a perfect testimony to the famous saying by Malcom X that, “The future belongs to those who prepare for it today,” Odediran added that “…she prepared very hard in the previous years and today belongs to her.”

According to him, “Tomorrow is also waiting for other determined Nigerian and African youths who begin their preparations today. We, therefore, urge them not to be discouraged by present challenges, but to continue to strive to realise their dreams”.

A visibly happy Amusan commended Globacom for appointing her as its ambassador. She assured the company of good representation at all times, in addition to being a good role model for youths.

She said, “I am proud to be associated with Glo as its brand ambassador. It is a proudly Nigerian company doing great things and empowering Nigerians. I am grateful to the Chairman, Dr. Mike Adenuga, Jr., for giving me this amazing opportunity,” she declared, adding that she would continue to project a positive image of the brand across the world.

Amusan, a two-time African Games champion, also won back-to-back African and Commonwealth titles in the 100m hurdles. She concluded her highly successful 2022 campaign by competing in the 100m hurdles at the Zurich Diamond League event, which she won in 12.29 seconds.

Personalities at the event include top sporting executives, the media and the management of Globacom Limited.