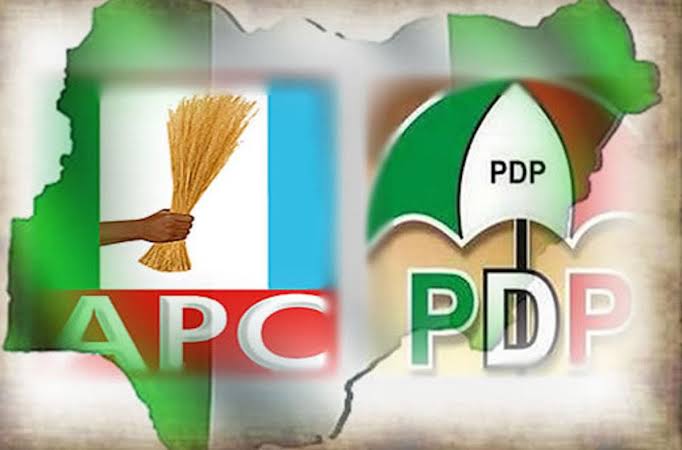 Your party is notorious for violence, PDP chair tells Famodun

About 24 hours after some suspected political thugs launched an attack on the campaign office of the Osun Central Senatorial candidate of the Peoples Democratic Party, the ruling All Progressives Congress has raised the alarm over alleged plan by the PDP and members of the APC who are loyal to Rauf Aregbesola, Minister of Interior, to plunge Osun State into a large-scale violence.

The Chairman of the APC, Gboyega Famodun, in a statement he signed and made available on Saturday, alleged that the PDP in collaboration with Aregbesola’s loyalists who are members of Osun APC caucus, The Osun Progressives (TOP), had procured petrol and over 600 guns for attacks during the forthcoming local government elections and ahead of the pronouncement of judgement in the state governorship election tribunal case.

Famodun claimed he received “discreet intelligence” that the alleged “grand and coordinated” planned attacks were targeted at leaders and members of APC in the state adding that the PDP was also planning to attack witnesses of Governor Gboyega Oyetola and the ruling party in the election tribunal matter.

Although the party chairman didn’t supply any concrete evidence to back up his alerts, Famodun further claimed that no fewer than 20 guns for each of the of the 30 local government areas and one area office and gallons of petrol had been clandestinely acquired by the opposition party to carryout their alleged planned mayhem.

The statement read, “a grand and co-ordinated plan of the opposition Peoples Democratic Party (PDP) to plunge Osun State into a large-scale mayhem which may shake the state in particular and the nation in general to their foundations has been unveiled.

“Discreet intelligence report revealed that the Osun State chapter of the PDP which is working in cahoots with an outcast tendency in the All Progressives Congress (APC) under the aegis of The Osun Progressives (TOP), have concluded a water-tight plan to attack some members and leaders of the ruling party which resultant effects might be avoidable loss of lives and destruction of movable and immovable property of their targets.

“The intelligence further showed that the PDP which has indicated its willingness not to partake in the October 15, 2022 local government council election in the state has clandestinely resolved to collaborate with the TOP in order to disrupt the election through violence, thereby making the state ungovernable by the sitting Governor Gboyega Oyetola.

“It was also scooped from our reliable source that the sittings of the state governorship election tribunal in Osogbo which have begun in earnest have been slated for another periods during which some members and leaders of the ruling APC, particularly our witnesses, would be attacked, run out of the town and subsequently prevented from being witnesses.

“Another period slated for the attack, according to the intelligence, is when the tribunal would be pronouncing its judgement whether it favours the PDP or not in order to appear to the unsuspecting members of the public that there is a genuine hatred or diminished popularity of the ruling party which will resort to an uprising against the APC leadership and the administration of Governor Oyetola.

“We also have it on good authority that the coalition of the Pathfinder faction of the PDP and TOP has resolved to use the intra-PDP squabble between Senator Adeleke and Prince Dotun Babayemi to disrupt the peace of the state.

“It was authoritatively gathered from the source of our intelligence that in order to effectively carry out the attack, the PDP leadership in the state has procured an average of twenty guns per local government with a resolve to equally purchase a large quantity of petrol with which some of the property of the APC members and leaders would be burnt down by the PDP thugs.

“The intelligence also indicated that the state PDP handlers have constituted a discreet committee which terms of reference is the compilation of the proposed targets and finding out of their residences or an auspicious place to get them down.

“It would be recalled that since the winner of the July 16, 2022 Osun State governorship election was declared by the Independent National Electoral Commission (INEC), it wouldn’t be an overstatement to state that these PDP-sponsored thugs have been perpetrating incidents of gory and brutal killings of some innocent individuals.

“Two members of the same family were suspectedly killed by the newly-appointed Chief Security Officer (CSO) to Senator Ademola Adeleke in Ede, the hometown of the governor-elect, over a disagreement on the sharing formular of the leftover of the Senator Adeleke’s governorship election largesse.

“Another person named Spanner was also killed at the Ilesa Garage area of Osogbo, the state capital, by the PDP thugs shortly after the governorship election.

“Daily harassment of innocent people by the PDP thugs have become a common feature across Osun State after the governorship election while Senator Adeleke himself moves about with a retinue of thugs across the state in a convoy of siren-blaring vehicles which is not a legal entitlement of his new status as a governor-elect.

“It is based on the aforementioned reasons that we are strongly informing the discerning members of the public and soliciting for the legal instrumentality of statutory security apparatus through which the plan of the state PDP to plunge our state into chaos could be nipped in the bud in the interest of the security of the people.”

But the Caretaker Chairman of the PDP in Osun, Akindele Adekunle, disagreed with Famodun and described all the claims as lies.

In a swift reaction, Adekunle told Famodun that APC in the state is notorious for violence adding that the PDP didn’t procure guns and neither was it planning any attack.

Responding to APC allegations through a statement he issued on Saturday, the PDP boss said, “The All Progressive Congress (APC) has launched statewide insurgency agenda and fictional security reports to create false security alarm to boost its petition to relocate the Tribunal sitting from Osogbo to Abuja, the Osun State Caretaker Chairman of the Peoples Democratic Party (PDP).

Adekunle described Famodun’s security reports as fictional and said they were “serious breach of state security, an insult on the integrity of the security agencies, a invidious message from the ruling party of intent to destabilise the state and a confirmation that the Osun state government and its ruling party are now security risk to be watched closely by the people and security establishment.

“The PDP expresses apprehension and utter anger at the unbridled desperation of the state government to plunge Osun state into conflict all in the devilish bid to stop peaceful transfer of power in November. We warn that all the unfounded allegations levelled against PDP by Famodun are clearly the insurgency agenda APC is already implementing starting with attacks on PDP offices, later party officials and what we learn may even involve attempt on the lives of the Governor-elect.

“Before the election, APC leading political thugs in Osun had in video and posts vowed to eliminate PDP leaders. In some areas, top thugs even issued a don’t vote PDP orders. Across the local governments, APC obviously procured thousands of guns with many armed miscreants in the state. It is on records that Asiri Eniba and his men were arrested on the eve of the election with high calibre guns. Proactive action by security agencies had saved Osun from mayhem openly boasted about by APC leaders.

“Ever since the conclusion of the election, Osun APC has not hidden its desire to create conflict to deny the realisation of the will of the people. Security agencies have arrested several leading APC thugs while many have been flushed out of their hideouts. Severally, APC has not hidden its affiliation with these agents of darkness whom it defended and even referred to as APC members.

“Unlike APC, PDP is a peaceful party with a sacred mandate from the people of Osun state. If we did not buy guns before elections, if we did not romance thugs before and during the elections, why should get involve in such now? We put it to Mr Famodun that reverse psychology cannot veil the evil intent of the APC to make the state ungovernable to justify its petition for the relocation of Tribunal sitting to Abuja.

“Osun people may want to note that the APC had written a petition to the President of the Court of Appeal asking that the Tribunal sitting at Osogbo be relocated to Abuja on the ground of insecurity. Security reports from across the agencies however disputed the APC claims , affirming that Osun is peaceful and that there is no threats to the safety of lives and properties. All the false concoctions from Famodun is a desperate but failed bid to paint Osun as a State in conflict and conflagration.

“We affirm as a matter of duty and patriotism that forging security reports to push a political agenda is a reprehensible conduct for which Famodun must be held accountable. In a bid to justify fake reports, Famodun and his team have unveiled plans to destabilise the state. This is unacceptable and must be visited with full wrath of the law.

“We condemn the APC petition on the Tribunal sitting. The push to relocate Tribunal sitting which is bound to fail is a ploy to derail delivery of justice. The PDP is ready to defend its mandate and the people of Osun state are waiting eagerly for a new dawn come November 27,” he said.

These allegations and counter claims came a day after the state chapter of PDP called on the Nigeria Police and other security agencies to bring to book perpetrators of the destruction that was carried out on the campaign office of its Osun Central Senatorial candidate.

The party warned that such ugly occurrence, if left unchecked, was capable of throwing the state into an unimaginable crisis.

Osun PDP, in a separate statement on Saturday, which was signed by Oladele Bamiji, its Director of Media, also described the attack on the campaign office of its candidate in Osun Central, Olubiyi Fadeyi, as highly provocative, thoughtless and dangerous considering the volatile security situation in the state.

According to the statement, the Osun Central Senatorial Campaign Office of its candidate, Olubiyi Fadeyi, situated along Oke-Fia, old Garage area of Osogbo was at the early hours of Friday, attacked and vandalised by unknown persons suspected to be political thugs.

The statement added that properties worth several millions of naira were also destroyed at the campaign office, with cars, billboards, computers and other office equipment badly damaged during the attack.

The PDP, which charged the police to do everything under the law to bring perpetrators of the attack to justice without delay, also warned that the party may not hold down its members in the wake of such a dangerous anomaly, especially when the culprits were pointedly identifiable in the state.

“The Osun Central Senatorial PDP candidate in the 2023 general elections, Mr Olubiyi Fadeyi is a peace loving philanthropist, who has never been found wanting in his conduct as a private entity and also as candidate of the party. The PDP then wondered why the APC would target him for attack.

“We remind the outgoing APC of the danger embedded in the latest turn of events. As we approach the 2023 general election, no amount of unprovoked attacks will deter our candidates from working with the electorate to condemn the APC and its candidates to the dustbin of history in the State,” the PDP had assured.