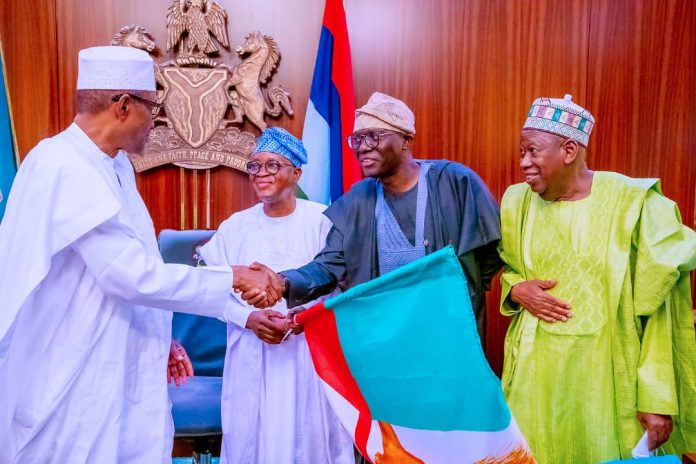 President Muhammadu Buhari, on Wednesday did the ceremonial presentation of the flag to the All Progressives Congress candidate in the upcoming elections in Osun State, giving assurances that the party is committed to furthering the development journey of the state.

The President commended the performance of Governor Adegboyega Oyetola, the candidate of the party, for serving the people tirelessly in his first term in office, adding that he has confidence in the party winning the election, fairly and squarely in the coming week.

President Buhari gave kudos to the co-chairs of the Osun State Governorship Campaign Council, Governors Babajide Sanwo-Olu and Abdullahi Umar Ganduje, as well as the Vice Chairman, Niger State’s Abubakar Sani Bello for putting in so much energy into the campaign to re-elect Governor Oyetola.

“I wish you the best of luck”, said the President.

In response to the invitation to participate at the Grand Finale of the rallies, next week, he said, “I hope I will make myself available to boost your morale.”

He described Governor Oyetola as a performing Governor who has done well in his first term and is deserving of a second.

He also expressed optimism that the party will emerge the overall winner in the general elections in February next year.

Present at APC presentation were the National Secretary, Iyiola Omisore and the Secretary of the Osun Campaign Council who is also the Sokoto State APC gubernatorial candidate, Ahmed Aliyu.