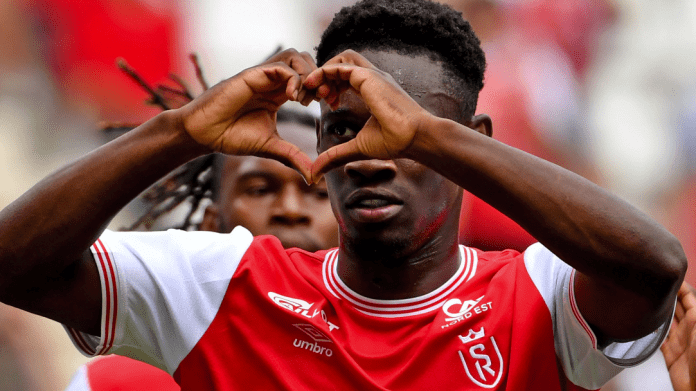 Stade de Reims left it late to pick up their first point of the season in the game against RC Strasbourg in the French Ligue 1.

Anglo-Nigerian striker, Folarin Balogun continued his goalscoring streak as he netted his third goal of the season.

For the second game in a row, the Gunners loanee was preferred to start in attack.

Oscar Garcia, the coach of Stade de Reims paired Folarin and Junya Ito up-front in a 3-4-1-2 formation to take on RC Strasbourg in matchday three of the 2022/2023 Ligue 1 Uber Eats.

Seconds before half-time, Ghanaian center back, Alexander Djiku broke the deadlock with a fantastic strike.

Djiku was quick to react to a loose ball in the box as he struck a left footed shot into the top right corner.

The second half resumed with the home side, RC Strasbourg piling up the pressureand possession which failed to amount to a second goal.

Stade de Reims fans would have something to smile about late in the second half as 21-year-old Folarin found the back of the net in the 81st minute.

By doing so, the Hale End Academy product equaled a 47-year record by becoming the first Reims player to score in each of his first three appearances since Jacques Vergnes in August 1975.

The game went on to finish 1-1 as Stade de Reims’ search for their first win continues.