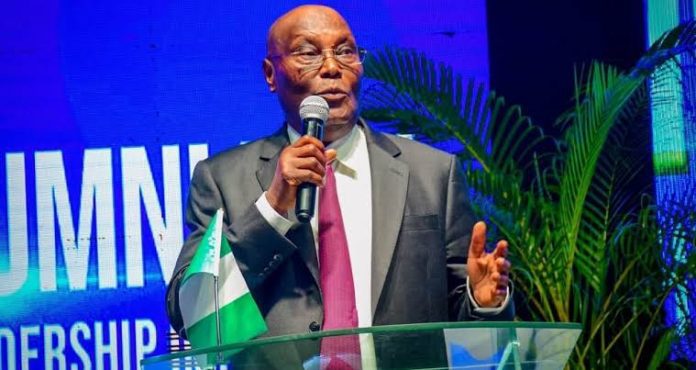 Presidential candidate of the People’s Democratic Party, Atiku Abubakar has made his stand known on a plethora of economic issues Nigeria is currently battling.

The former vice president of Nigeria who spoke about his recovery plan for Nigeria at the Lagos Business School 2022 Alumnia Day which had in attendance business executives, engaged the audience about economic issues, fuel subsidy, foreign exchange policy, debt crisis, power as well as the oil and gas sector.

He also used the platform to pay tribute to the private sector for the successes recorded by the PDP between 1999 and 2007.

Atiku who started his session by giving a brief background with economic gains of the PDP between 1999 and 2007 including debt cancellation, privatization, banking reforms as well as effective working partnership with the private sector.

On the rising cost of governance, the former Vice President said he would revisit the Orosanye report and ensure the white paper report is in conformity with the principle of setting up the committee.

He further said his privatization plan is not to render people jobless but to ensure effect governance.

Speaking on fuel subsidy, he noted how the PDP government had phased out subsidy in batches, saying: “I was the chairman for the removal of fuel subsidy committee and I recall how we removed the phase 1 and phase 2 of fuel subsidy. I will continue from were we stopped, remove fuel subsidy totally and channel the subsidy funds back to the economy. In other words, it’s just a fraud.”

He described Nigeria’s debt situation as a mess, saying he would fix it if he is elected president.

His words: “If you are talking about foreign debt, we have done it before, I will engage our creditors and ask for debt forgiveness or cancellation like we did before. Coming to local debt, if we stabilize the economy, we will borrow less, propose a flexible payment plan.

“Again, I want you to compare our records with the current government and you can see who did well economically.”

The former vice president stated that he will reform the oil and gas sector by ensuring the right investors are engaged such that Nigeria’s crude production increases while ensuring the privatization of the three refineries in the country.

According to him, with such policies in place, it will ultimately make Nigeria an oil production hub.

He equally vowed to ensure proper funding for public education, arguing that it should be enjoyed by children of the poor for free.

He also promised to reposition the UBE set up in 1999 to its main purpose which is to reduce out of school children in the country.

When asked to comment on the autonomy of the CBN, Atiku said the current managers of the apex bank are taking a cue from the current administration ”which lacks direction.”