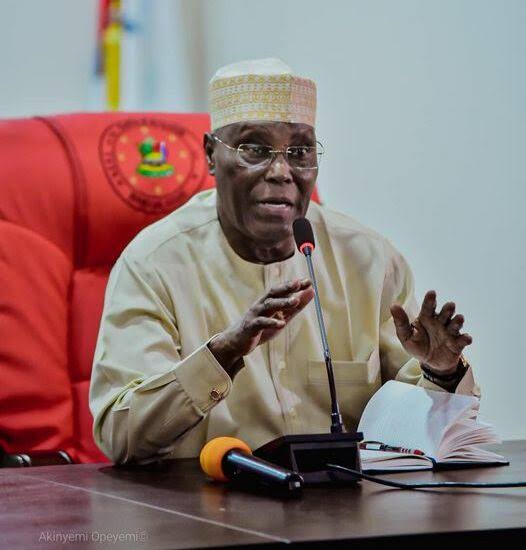 The People’s Democratic Party, Ebonyi State chapter, has assured Nigerians that Atiku Abubakar is the only lifeline for the nation in the 2023 general elections.

The party’s chairman in Ebonyi State, Tochukwu Okorie, gave the assurance while speaking with The Point Correspondent in Abakaliki and enjoined all Nigerians irrespective of zones of origin and political affiliations to vote for the PDP’s presidential candidate for a better Nigeria.

According to Okorie, Atiku even as a Vice President assembled the most viable economic team which Nigeria ever had since 1999 till date.

“Nigeria beyond rhetoric needs someone who can deliver on the job irrespective of origin. So my job as a party man who believes not just in my party but also in the candidacy of Alhaji Atiku Abubakar is to remind Nigerians that Atiku has been a Vice President for eight years and in the period he made very significant contributions. For his part as the Vice President he was able to assemble an economic team which remains the best since 1999 till date. This is to mention just a few.

“The enterprise called Nigeria needs rescue and redemption at this point but where the rescue comes from doesn’t matter. I think it is correct for Nigerians to take their destinies in their hands. The defining word is capable. Atiku is capable among the gladiators to bring Nigeria out of the dungeon in terms of economic rebirth, social reunion and so on.

“Ebonyi State is known as a PDP state and that is the street value of our party. PDP owns Ebonyi. APC is just consist of the governor and his cabinet members. Others are opportunists who came to look for tickets or platforms to contest elections.

Beyond these, there are no APC members anywhere in Ebonyi State. APC is not different from other mushroom parties in the state,” he said.

The party chairman expressed joy for Governor David Umahi’s defection away from PDP to APC, noting that the movement gave way for liberation of the members and the party in general as “he held everything and everyone down.”

“For us in PDP who are loyal to not just the party also to the Constitution of the Federal Republic, it remains a thing of joy that Mr. David Umahi moved on (defected) to allow the real democratic values to flourish in PDP, because while he held sway, he held everything and everyone down. His exit from the People’s Democratic Party liberated souls, liberated ideas, visions and we got a new vista as a party by his share exit, so there is nothing to regret,” he added.

When asked strategies on how to recapture the state as a PDP State, Okorie said, “When you talk about recapturing of the state, we are not recapturing the state because it belongs to the PDP. What we need to recapture is the Government House at the Centenary City.

The party chairman further assured electorates that the PDP will resist every form of attacks from the ruling party and clinch victory in the 2023 polls.