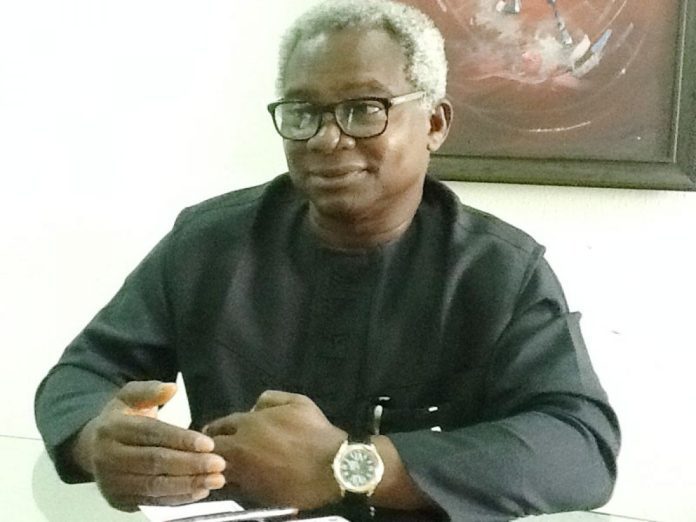 The Director-General of Voice of Nigeria, Osita Okechukwu, has said that former Vice-President Atiku Abubakar’s move to reconcile with Governor Nyesom Wike’s group in the People’s Democratic Party is belated.

Okechukwu said this when he responded to the statement by Atiku that the ruling APC was a contraption of Bola Tinubu’s party, Action Congress of Nigeria and Buhari’s party, the Congress for Progressive Change, which will collapsed after its defeat in the 2023 general election and that he would reconcile with Wike-G-5-Masquerade.

In a statement in Abuja titled, “Atiku’s attempt to reconcile with Wike-G-5 -Masquerade is belated by headwinds”, the APC chieftain described the assertion made by the Waziri Adamawa as hallucination and medicine after death.

According to him, it is ridiculous for the former Vice President, a veteran, to think that the plank of justice of rotation convention meted to PDP’s Constitution and the Federal Character principle of 1999 Constitution will be easily swept under the carpet.

And on the issue that APC would lose 2023 presidential election and collapse, being a contraption of Tinubu’s party and defunct CPC, Okechukwu exclaimed, “Is it not an express loss of memory for His Excellency who was a member of the newPDP that joined in the formation of the APC, to attempt to rewrite history in pursuit of his presidential ambition?”

He said that it would be unfair and unpatriotic to the southern part of the country for any northerner to think of presiding over the country after the tenure of President Muhammadu Buhari, a fellow northerner, in May 2023.

“This is one of the major headwinds that are blocking his puerile reconciliation with Wike-G-5-Masquerade.

Atiku is a foremost beneficiary of the rotation convention in 2018, during PDP’ presidential primary in Port Harcourt, which Wike hosted. It’s trite law that he who comes to equity will come with clean hands.”

Apparently referring to the recent meeting of the Wike-G-5 Masquerade with Bauchi State Governor, Bala Mohammed, Okechukwu posited that the virile letter Bala wrote to Atiku penultimate week, questioned the integrity of the former Vice-President.

“How can he wage a proxy political war against the Bauchi governor? News filtered that Atiku questioned his temerity not to step down like Governor Aminu Tambuwal. This is one of the headwinds which will make reconciliation impossible.”

“Thus the movement of the Wike-G-5-Masquerade northwards, is afloat, obviously sounding the death knell for Atiku’s ambition.”

“Methinks Wike-G-5-Masquerade, which is frantically chasing Atiku because of his infidelity to the South and PDP’s Constitution, which is the breach of power rotation between north and south; is driving him into a state of delusion. For the other day, in Arewa Summit he admonished the north not to vote for Yoruba or Igbo, an unpresidential goof and, in the present instance, distorting the genesis and capacity of the APC.”

Okechukwu said that lacking the pragmatism to ease out Iyorchia Ayu as the PDP chairman in line with his serial promise to Wike-G-5-Masquerade cast Atiku’s integrity, necessary dexterity and know-how to unite this country in serious doubt.

“Ironically, whilst Atiku is de-marketing the APC as if he has no baggage, the Wike-G-5’s masquerade is extending its fangs northwards; the unintended consequence is definitely erosion of Atiku’s victory.

“If Atiku cannot unite his party, curb Peter Obi’s widespread erosion of PDP’s support base nationwide and design how to pick the remaining votes from Senator Rabiu Kwankwaso’s dominance in Kano how can he win?” he added.

Okechukwu dismissed Atiku’s late attempt to mend fences with Wike-G-5-Masquerade via IBB and other retired generals of PDP’s hue. He remarked that the puerile effort amounts to medicine after death.

“The Wike-G-5-Masquerade had bolted. The so-called reconciliation is a kind of medicine after death, because it is said that there is no repentance in the grave. I doubt that the Wike I know will recruit 200,000 Special Assistants for Atiku’s victory. The Wike-G-5-Masquerade is aware and experienced enough to appreciate the dangers of the Daggers-Syndrome.

“In the parlance of the Italian Mafia, you cannot pull the Dagger or Pistol and put it back in the holster.

You must shoot or you are killed. They know Atiku’s DNA-Vengeance like most politicians is of high degree.

He will never forgive them if he wins. And Nigerian patriots will not forgive Wike-G-5 for pardoning a desperate politician that selfishly breached rotation convention.”

On the notion within Atiku’s circles that Peter Obi has not the enormous resources needed to dominate the South East and South/South and claims that PDP will do well in South West, Okechukwu remarked that those permutations are not valid.

“Everything is not money, for one of the headwinds Atiku faces nationwide undoubtedly is that most patriots are in the same rotation of power convention boats. This is for the harmonious and corporate existence of our dear country. Added to this is Peter Obi’s pedigree and Atiku’s unnecessary proxy war in Bauchi State.

“South West is Asiwaju Bola Ahmed Tinubu’s base, if there is any opposition, that’s Peter Obi. Majority South West voters are sophisticated and sincerely are of the candid view that it is unfair for another northerner to preside over Nigeria immediately after President Buhari,” the DG VON said.