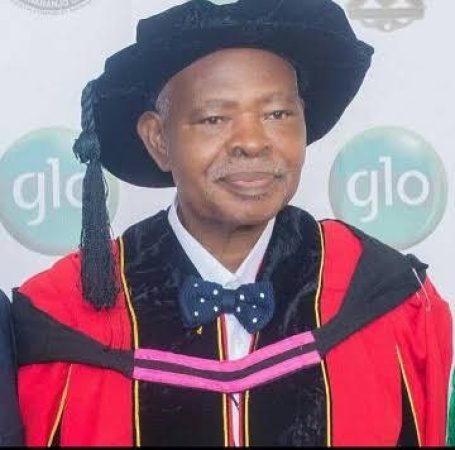 My brother, namesake and senior colleague, Tunde Ipinmisho, was who called me to convey the distressing information about Ayo Olukotun’s medical situation in the last week of December 2022.

Olukotun, a professor of international relations at the Olabisi Onabanjo University, Ago-Iwoye, Ogun State, had suffered a massive stroke.

He had been taken in at the intensive care unit of Babcock University Teaching Hospital, Ilishan, Remo.

He bemoaned the levity with which matters of healthcare, well-being, and human life are treated in our country.

For all four of us including Olukotun, the erstwhile Daily Times of Nigeria was a common denominator.

We all met as professionals in that organisation.

By some coincidence, we all came from the Okun-Yoruba extreme of contemporary Kogi State.

Our shared professional careers, and maybe the fact of coming from the same sociocultural homeland, were adhesives and binders.

Wednesday, January 4, 2023, just about a week after Ipinmisho passed to me the gravity of Olukotun’s situation, the sad news of his demise was in the air.

He passed on in the early hours of the day leaving behind, bewildered biologically related nuclear and extended families.

This is not forgetting his equally devastated outer concentric rings of critical affiliates and associates.

Metaphorically, a whale had exited the waters of Okunland where he hailed from, where scholarship is the most important vocation only after subsistence farming.

The media fraternity where he devoted a substantial quotient of his professional career, ‘parri passu’ with the academia, had been robbed of one of their best and most diligent. The Nigerian and indeed global intellectual community had been gruffly dispossessed of one of their most cerebral, most prized, most rigorous, colleagues and compatriots, albeit a very unobtrusive one at that.

The subsequent outpouring of grief from the highest quarters is evidence of the veneration and esteem Olukotun held.

From Muhammadu Buhari, Nigeria’s President, to the Speaker of the House of Representatives, Femi Gbajabiamila, the attendant lachrymose has been most palpable. Olukotun’s countrymen as well as colleagues in the media and academia, still wield their tear-soaked handkerchiefs in mournful despair. Eyitayo Lambo, distinguished professor and former health minister; Olu Obafemi, Emeritus professor and recipient of the 2018 Nigerian National Order of Merit, (NNOM), and Gabriel Godini Darah, a renowned professor of oral literature, are shattered by the news of Olukotun’s exit.

Toyin Falola, a renowned historian, professor and soul mate of Olukotun; Yemi Akinwumi, also a reputable professor of history and vice-chancellor of the Federal University Lokoja, (FUL), are variously stung by the development. Gbenga Ibileye, a professor of English at FUL; Rafiu Olusola Enikanolaye, retired career ambassador and former student of Olukotun; Ngozi Anyaegbunam and Ndubuisi Ugbede, Olukotun’s former colleagues in the primordial Daily Times conglomerate, are most pained.

“The media fraternity where he devoted a substantial quotient of his professional career, ‘parri passu’ with the academia, had been robbed of one of their best and most diligent. The Nigerian, and indeed global intellectual community had been gruffly dispossessed of one of their most cerebral, most prized, most rigorous, colleagues and compatriots, albeit a very unobtrusive one at that”

I had caught glimpses of Olukotun around and about the University of Ilorin, around the late 1980s. I was a postgraduate student at the institution between 1987 and 1989, and I saw him not on a few occasions. We were to meet subsequently at the erstwhile Daily Times of Nigeria Plc, where I worked between 1990 and 1998. Yemi Ogunbiyi, the revered scholar, author and administrator was leading a major revolution and reorganisation in the organisation and opened up space for academics and media professionals alike.

While I made the rounds filing my professional dentition from the features desk of Sunday Times through Daily Times beginning in 1990, Olukotun joined the newspaper behemoth in 1991, as a Member of the Editorial Board.

A documented creation of Stanley Macebuh, serial midwife of several newspapers in his time, the concept of the Editorial Board has since been adopted across board in the media. The Editorial Board was something of an exclusive faculty of academics and professionals, indeed some kind of coven or cult of media eggheads.

It met on scheduled days of the week to distil and dilate topics of sociopolitical contemporaneity for further espousal.

Notable scholars like Chidi Amuta, Darah, Anyaegbunam, Omar Farouk, among others, populated the Daily Times Editorial Board in that era. I was deployed to the Editorial Board in 1993, which brought me closer than ever, to Olukotun.

For us his younger colleagues and friends, it was more convenient to call him ‘Boda Ayo’ or ‘Egbon,’ as we do in our parts of Nigeria.

His hair and face were already interspersed with grey strands at the time, which in some cultures is physical evidence of wisdom and knowledge. His doctorate was yet on the way, but he was already playing the part of an authentic intellectual. He was already well published in books and journals at that time by the way, so was thoroughly grounded. The quantum quality he breathed, spoke volumes of his deep immersion in scholarship. Olukotun’s contributions to discourse were typically robust, properly processed and distinctly profound.

He emitted rooted knowledge, his grasp of English bore the patent of “native language speaker competence.” He had his way with words.

While undertaking a self-imposed appeal for fiscal support for one of our distressed younger colleagues those days, I remember him asking me: “Tunde, what is your resource profile like?
I’m leading a broad-spectrum solicitation for a beleaguered younger colleague.”

I was momentarily hit by the high falutin words but had to process them speedily and spontaneously to advance a response. That was the humanist in Olukotun. That was the manner of elevated contributions and interventions he brought into our Editorial Board encounters.

He was ideologically aligned towards the left, and his perspectives as a radical scholar, added pith to our engagements.

Ayo Olukotun would have been 70, May 2, 2023. He was born in Jege, a community in Yagba East local government area of Kogi State.

He was the archetypal ‘eni ti o te apata dide,’ one who emerged from the hard ground of the rock, intent on carving a niche for himself, irrespective of life’s challenges.

He was educated at the famous Titcombe College, Egbe, Yagba West LGA, between 1965 and 1969. He served early warning of his imminent disposition to academia, earning five distinctions in the West African School Certificate Examination, which he wrote in his final year.

Olukotun was something of a “career student” of the Obafemi Awolowo University, from the primordial years of the institution’s nomenclature of “University of Ife,” (Unife).

He obtained all his three degrees, bachelors to doctorate from that citadel in 1976; 1982 and 2006, respectively. He was a unionist who was Secretary and President of the Students’ Union respectively, at various times. As a student leader, he was at the forefront of presenting to the public a counter-narrative to the rot and decay perpetuated by successive military governments in Nigeria. He cut his teeth as a socially committed intellectual, beginning from his days as a young student.

He lived his life between the classroom and the newsroom, having lectured in half a dozen universities during his lifetime. He was at the Ahmadu Bello University, Zaria, 1977 to 1988, as well as the Lagos State University and the University of Lagos, concurrently between 2002 and 2007.

He was appointed professor of political science at Lead University, Ibadan, where he worked between 2007 and 2014 and was visiting professor of international relations at OAU, between 2015 and 2016.

He became “Distinguished Governance Professor,” at the Olabisi Onabanjo University, Ago-Iwoye, where he occupies the “Oba Sikiru Kayode Adetona Professorial Chair of Governance.”
As a true journalist and public scholar, he subsequently served on the Editorial Boards of The Nigerian Compass, Nigerian Tribune, Daily Independent and Anchor Newspapers respectively.
He was also a columnist in many publications, including The Punch where he sustained a much-awaited column, beginning in 2013. He received the Diamond Awards for Media Excellence (DAME), for informed commentary in 2013.

He authored, edited and co-edited many reference academic books including: Repressive State and Resurgent Media in Nigeria, (2004), and Political Communication in Africa, (2016, which he co-edited with Sharon Omotoso).

He also wrote: Watchdogs or Captured Media? A Study of the Role of the Media in Nigeria’s Emergent Democracy: 1999- 2016.

Olukotun had well over half a century of academic papers published in international monographs, books and journals.

The Wednesday January 4, 2023, departure of Professor Ayo was not a nice way to welcome the dawn of a new year. But who are we to question the whims of the Almighty? Olukotun is survived by his wife, Stella and two sons, Temitope and Oluwatomisin, both young adults. Members of his extended family include: Bola Ola-Oluwa, an elder and head of the family; Caroline Oriowo; J.S. Olayemi; Kunle Olukotun, (architect and younger brother); Funmi Abasi and Iyadunni Babatimehin.

Olusunle (PhD), poet, journalist, scholar and author is a Member of the Nigerian Guild of Editors.