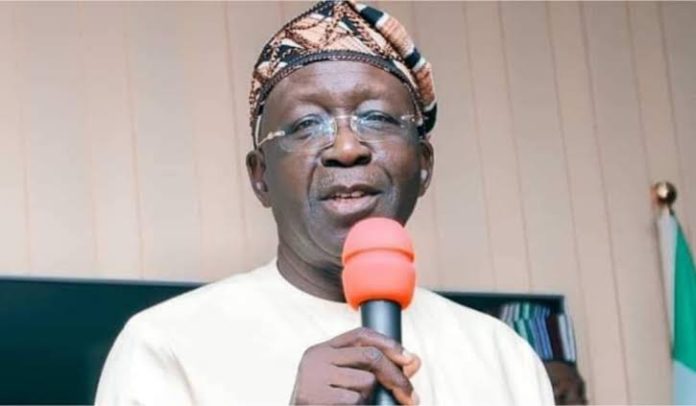 National Chairman of Peoples Democratic Party, Iyorchia Ayu, on Wednesday, deplored the poor living condition in the Niger Delta, saying that in spite of the region’s huge contributions to the nation’s economy, the poverty rate in the area had continued to rise.

He said that the situation in the zone was bizarre, given the volume of wealth it bore, and that the region deserves a better deal from the federal government. He, therefore, called for concerted efforts by all stakeholders to address the challenge.

He insisted that the people of the Niger Delta deserved a better deal for their sacrifices and contributions to the nation’s economic mainstay.

He, however, lauded Governor Ifeanyi Okowa for his outstanding development efforts in the state, especially in the construction of the modern market which would contribute immensely to the growth of commerce in the area.

The PDP Chairman said that the All Progressives Congress-led Federal Government had set the country backward for over 50 years, and urged Nigerians to support his party’s mission to rescue and rebuild the nation.

He said, “thank you Deltans for the support you have given to us in our journey so far to recover and rebuild Nigeria.

“I am happy to come back to the State for the second time as National Chairman of our great party to inaugurate projects executed by Governor Ifeanyi Okowa who by the grace of God will become our next Vice-President in a few months.

“I first took note of Okowa’s works as Governor when he built the best State Secretariat in the country and I remember telling him that the nation was taking note of his contributions to the development of his people.

“Some political parties will come to campaign to the people, make all manner of promises to deceive the people into voting for them but when they come into the office they don’t fulfill their promises and that’s criminal.

“But the PDP which I was a founding member was formed to work for the people and we are particularly proud of our governors who are hoisting the party’s flag high.

“I am happy that there is continuity in governance here in Delta and the three governors so far, have not disappointed Deltans,” he said.

Ayu said Okowa’s outstanding works and contributions to the party earned him the Vice-Presidential ticket and described him as a brilliant and articulate man who had continued to offer greater services to the party and the country.

“Okowa is an articulate and brilliant statesman and we the leadership of the party decided that Delta State has to be rewarded for its contribution to the growth and development of the party.

“The poverty in the Niger Delta must be tackled and it must not be left for the state governments alone. Concerted efforts must be made by all stakeholders, including the Federal Government and oil companies, to the development of the region.

“You are the second son of the Niger Delta that would be fortunate enough to ascend to such a high office from the region and it is our hope that you pay special attention to the needs of the people of the Niger Delta when you become the Vice President of the country.

“I was here last year to inaugurate a road named after my friend, Ambassador Ralph Uwechue, and the multi-billion naira storm water drainage projects in Asaba.

“I also inspected the Model Technical College in Asaba that was built almost like a university which you replicated in other parts of the state and I believe the people of Delta will not forget you,” he told Okowa.

In his remarks, Governor Okowa paid tribute to his predecessor, Dr Emmanuel Uduaghan, who conceived and started the construction of the market which was later abandoned due to financial constraints and non-performance by the contractor.

“I was part of the initiative when I visited Warri North for the inauguration of projects at Oboghoro and Utonlila communitie and I visited the market project and assured that we would take steps to re-award the contract.

“We got a local contractor, an indigene of the community to take up the job and we thank God that in two years, he was able to deliver and it is important to state that our people have the capacity to do great things,” he said.

Okowa urged the party hierarchy to support the development of the region, pointing out that “it costs so much to execute projects in the Niger Delta”.

“When we take over the government of Nigeria on May 29, 2023, I am sure that we will get to understand that the people of the Niger Delta truly have a very difficult terrain.

“If it costs a billion to build a project in some other states, it could cost up to N5 billion to execute such projects here,” he said.

In his remarks, the Olu of Warri, Ogiame Atuwatse III, commended the governor for ensuring the completion of the age-long market, adding that its completion would improve the growth of commerce in the area.

He said that the area was known for its abundance of oil and gas but regretted that the people had not benefited from the proceeds from the exploitation of the resources.

The Warri monarch further said that building the market was commendable as commerce remained the best way to reposition Delta beyond oil and gas.