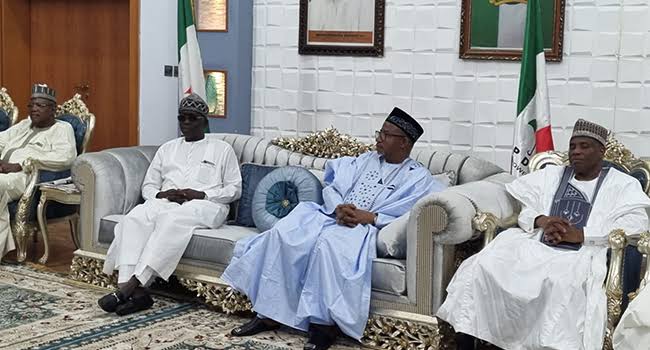 The delegation arrived in Bauchi in the evening to meet Mohammed over pressing issues in the party.

Speaking shortly before the meeting, Ayu described Mohammed as one of the major national stakeholders who contributed to the development of the party.

“We are here to brief you on some of the developments that are going on in the party, and to seek your wise counsel because you’re not just the governor of Bauchi, you’re a leader in this country

“You are experienced in all the places you served, and we thought people like you in this campaign, from time-to-time, we need to come around, consult and brief you on some things,” he said.

Responding, Mohammed said that he is a loyal member of the party and believed in it, adding that “we rose on the back of the party to become what we have become.

“We know that we came from ANPP (All Nigerian Peoples Party), but certainly whatever we have become it’s courtesy of this party.

“We have discussed issues affecting the party, especially my area as a vice chairman of the presidential campaign council in charge of the north.

“So, they came with issues regarding some grey areas that we crossed the Ts and dotted the Is, and it’s not for public consumption.

“Certainly, it is part of closing rank, discussing issues which the National Chairman with humility came down to Bauchi with Director-General himself and of course our leader,” he said. (NAN)