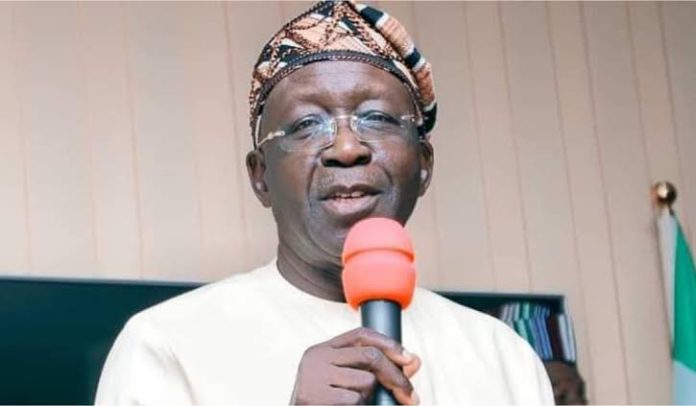 Northern Elders in the Peoples Democratic Party have rubbished calls for the resignation of the party’s Chairman, Iyorchia Ayu, insisting that the former Senate president will remain in his position.

Governor Nyesom Wike of Rivers State and some of his allies have called for the removal of Ayu, stressing that the PDP cannot produce a presidential candidate and national chairman from the same region.

Speaking after its meeting in Kaduna on Friday, the chairman of the PDP elders group, Nasiru Aliyu Sadauki, said the region will back Ayu to continue as party chairman.

He noted that there was the need for all stakeholders to sheathe their swords for PDP to progress and unite ahead of the inauguration of the Atiku/Okowa campaign council.

Sadauki called on PDP leaders to face important issues of economic condition, insecurity, poverty, educational crisis, and other challenges that are threatening Nigeria’s unity and cohesion.

He said: “There are issues on the ground that need leaders to make sacrifices, offer solutions and relief to the public. No sensible party supporter will promote and seek Ayu’s exit in this time of expected cooperation, unity, and understanding in the party.

“Nigerians are tired of such media display of arrogance by a certain group of political elites in the country. Let us face issues and rebuke or disregard any political class that is more interested in seeming public sympathy rather than act to help rebuild the nation.

“We wake up daily with news of unpleasant happenings in the country especially the killing, maiming and kidnapping of our fellow Nigerians including women and children which the All Progressives Congress (APC)- led government has failed to nip in the bud.

“To our surprise, our party is talking about “Ayu must go” and “South will not agree” which are issues that could be resolved amicably behind the curtains.”

The chairman of the PDP northern elders stated that the crisis rocking the party is intended to destroy every good and positive transformation of the Ayu-led National Working Committee.

According to him, those fanning the ember of disunity, cohesion, and progress of PDP are doing so to create confusion that may make Nigerians reconsider the All Progressives Congress.

“We call on PDP supporters within and outside the country to unite and support the leadership of the party under Dr Iyorchia Ayu to collectively rescue and rebuild our country from the ruins of the APC.

“The inability of APC-led government to resolve the lingering issue of the Academic Staff Union of Universities (ASUU) alone is enough to see the reason for all of us to work together with the party leadership to ensure APC is sent packing in 2023.

“We, however, advise the Ayu-led National Executive Council (NEC) to immediately swing into action to unite the party before the commencement of the campaigns to ensure we offer greater hope for the survival of Nigeria ahead of the 2023 elections,” he said.