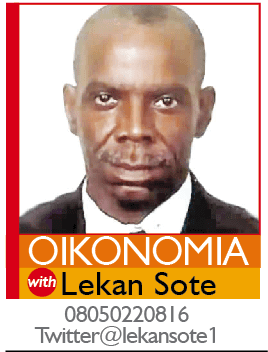 Members of Northern Nigerian political establishment, or the cabal, usually argue that they insist on holding on to political power at the centre for economic survival or existential reasons because the Southern elites have cornered commerce and the professions.

The Igbo also insinuate that the indigenisation policy favoured the South West because senior civil servants who implemented the policy were mainly of the South West, who deliberately skewed the transfers to favour their kinsmen.

They argued that because the Igbo were just coming out of the throes of the murderous and devastating civil war, they were not in a position to muster the financial wherewithal to effectively participate in the Public Offer bazaar.

They may have a point. The other day, a South West business mogul, who profited from this equivalent of a national “yard sale” was boasting about his prowess in cornering substantial, controlling, stocks of blue-chip multinationals that were compelled to sell their shares.

For the enlightenment of those who may not know, the Indigenisation Decree gave Nigerians the exclusive right to the ownership of some enterprises and greater participation than hitherto in the ownership of others.

Also, foreigners were barred from a category of businesses but were allowed partial ownership or even complete ownership of some. That explains why some Nigerians started owning shares in the Nigerian subsidiaries of many multinationals.

The policy was championed by bureaucrats and Nigerian businessmen under the auspices of the Federal Government’s National Development Plan for 1970–74.

In February 1972, the Nigerian Enterprises Promotion Decree was promulgated, but it became effective in April 1974.

The North’s argument for patronage, holding tight to power as an end, coupled with the argument of a medical professor, who was also university vice-chancellor and Minister of Education, that the idea of educationally disadvantaged states should be used to hold back Southern states so that the Northern states can catch up, is absurd and unprogressive.

On this issue of education, it would have been better if the Northern Nigerian political establishment had insisted on a Marshall Plan to upgrade facilities of the Northern educational infrastructure to ensure parity with the South, instead of seeking to hold down the educational progress of the South.

It is unacceptable for the North to insist on running the polity in order to be able to impose politics of sharing of only economic resources, in the name of equal opportunity, instead of husbanding the resources for growth and expansion of the economy.

“By insisting on pushing only Northerners into strategic public offices in government Ministries, Departments and Agencies or government-owned enterprises, even when they are not exactly qualified for those positions, the economy and well-being of all Nigerians is impaired”

And the success that this huge Northern Nigerian agricultural sector would have attracted would have more than compensated the North for the so-called monopolistic hold of Southern Nigeria on the economy of Nigeria. The North is making it look as if without crude oil Nigeria cannot have an economy.

Somebody should remind those who think that way to remember that fossil fuel, a by-product of crude oil, is on its way out of powering the manufacturing and transportation industries. Electric cars are gradually easing petrol- and diesel-driven cars out of the automobile industry.

What the Northern Nigerian political establishment needs to understand is that Southern Nigeria’s economy, which is close to the coastline, will grow organically, in spite of the wrongheaded macroeconomic policies of the Federal Government, and any efforts to willfully hold it down.

In other words, the North should recognise this incontrovertible fact and seek to cooperate with the South to run a government of competent public officers who will deliver macroeconomic policies that will grow the entire economy for the good of everyone, North or South.

Anyone who has any knowledge of the blue economy, or the exploration, exploitation, preservation and regeneration of resources of the ocean will tell you that there is no holding back an economy that is situated beside a substantial body of water.

As you probably know, River Nile, that is even an inland waterway, is the cause of the development and growth of the highly successful economy of ancient Egypt. Clearly, the communities of the Niger Delta region are beneficiaries of the River Niger, the river that bore explorer Mungo Park’s canoe, the “Schooner Joliba.”

Remember that the Portuguese, the first set of explorers to the Niger Delta area that is closest to the Gulf of Guinea also known as the Grains Coast, in the 15th Century, came through the Atlantic Ocean.

By insisting on pushing only Northerners into strategic public offices in government Ministries, Departments and Agencies or government-owned enterprises, even when they are not exactly qualified for those positions, the economy and well-being of all Nigerians is impaired.

Just consider the underwhelming and abysmal performance of security agencies and government-owned enterprises run in the main by personnel with only one worldview: One case of weakness is the inability of the correctional institution to repel terrorists who attack their facilities to free incarcerated terrorists and insurgents.

Another case is the disgraceful performance of the renamed Nigeria National Petroleum Company Limited that has consistently been unable to run its four refineries effectively, efficiently and profitably.

The result of that failure is the employment and continued retention of mostly idle members of staff who are unable to produce strategic petroleum products, but resort to the expensive option of importing petroleum products, depleting scarce foreign exchange, while pretending to be running the moribund refineries.

And instead of firing those who fail to significantly contribute to the success of these agencies and government-owned enterprises, their inadequacies are overlooked, and they get even more pampering and indulgence. You do not build a first-rate economy that way.

A friend points out that where you have nearly all security agencies and strategic government-owned enterprises run by people who share the same region, ethnic background, culture, language and religion, you end up with “group-think,” where all have shared values and points of view on practically all issues, almost without the opportunity of experiencing contrary, or at least, alternative viewpoints.

Sometime in the past, a superior Federal Government official had cause to query a junior officer for insubordination, negligence and inability to perform his official duties. The outcome will stun you to the marrow.

The subordinate not only neglected to respond to the query but the superior officer who issued the query was also transferred to a remote location. After about three years, he was returned to the head office as subordinate to his erstwhile subordinate in another section of the same agency.

If the Northern Nigerian political establishment continues to insist on exclusively running Nigeria, the resulting tunnel-vision will ruin the government, the depository of the political power that they covet so much.