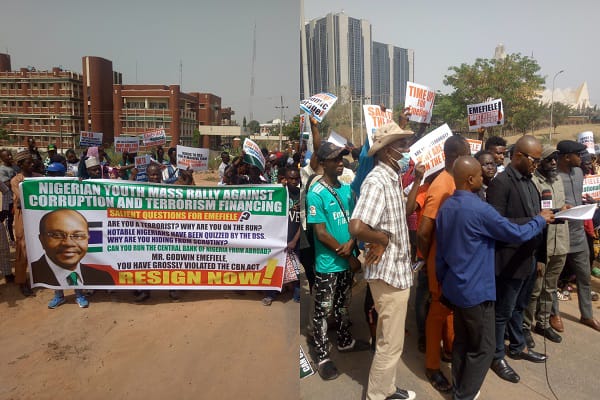 For allegedly refusing to make himself available to the Department of State Security for questioning over alleged terrorism financing and economic sabotage, among other nefarious acts, the Governor of the Central Bank of Nigeria, Godwin Emefiele has been asked to resign his position.

Scores of youths, under the aegis of the National Youth Council of Nigeria made this demand on Wednesday, after storming the headquarters of the nation’s bank in Abuja in protest.

The protest is ongoing amid tight security in and around the CBN headquarters.

As at the time of filing this report, the protesters, armed with big banners and chanting solidarity songs, sought Emefiele’s resignation over his refusal to appear before security operatives for questioning on the allegations slammed against him.

The protesters, who also carried placards bearing various inscriptions alleged that the CBN Governor is a threat to national security, demanding he must resign or be sacked by the Federal Government.

They asked him to acknowledge the invitation of the DSS.

Leading the protest holding at the gate of CBN, NYCN President, Solomon Adodo, said the group would continue the protest in Abuja and across the country until the CBN Governor resigns.