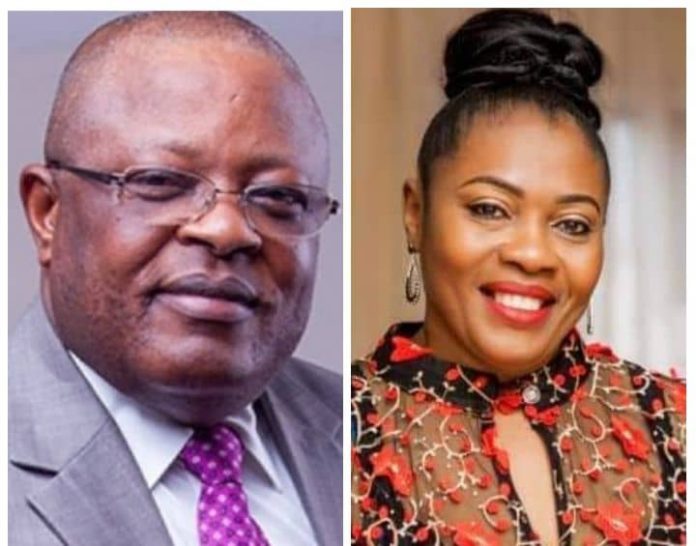 Jackie Ikeotuonye, an Abuja-based businesswoman and financial consultant, has accused Governor Dave Umahi of Ebonyi State, of threatening her life and therefore called on the Inspector General of Police Usman Baba for protection.

She said that the call has become necessary because she has temporarily abandoned her residence as she believed some unknown faces are stalking her. She said that her life is not safe.

Jackie, daughter of the late legal luminary, ABC Ikeotuonye, SAN, and Chief Executive Officer of Andrew Bishopton Limited, Abuja, said she is not safe since her company and partner took the Ebonyi State Government to court for the failure of the government to pay her the agreed fees.

Ikeotuonye said the Ebonyi State Government engaged her company, Andrew Bishopton Limited, and partner, Mauritz Walton Nigeria Limited to recover money wrongly deducted by the Federal Government on foreign loans from the state government between 1995 and 2002.

“Andrew Bishopton Limited and partners were appointed by the Ebonyi State government as a consultant to recover excess deductions/charges on foreign/local loan facilities and other hanging funds on behalf of Ebonyi State via a letter dated 6th October 2015 and signed by the then Commissioner for Finance and Economic Development, Dr. Dennis UdeEkumankama.”

This appointment, according to Ikeotuonye, was followed by a consultancy services agreement signed between the state and Andrew Bishopton on November 17, 2015 where it was stated that the state would pay the company 25% of the sum reconciled, recovered, and paid into the account of the state by the Federal Government.

The state government, she added, “Went further to introduce Andrew Bishopton to the relevant government agencies like the Central Bank of Nigeria, Debt Management Office, and the Federal Ministry of Finance, as contained in the agreement to enable us to have access to the relevant departments and information during the course of the assignment.

“The assignment commenced in earnest, without any form of financial mobilisation or upfront payment from the state. The governor during the first meeting made it clear through his Commissioner for Finance that he was not going to mobilise us for the job.

“The company had to seek other avenues to finance the assignment. And this led to the joint partnership with Dr. Mauruis Ibe of Mauritz Walton Nigeria Limited who bore the bulk of the expenses incurred during the assignment. As the assignment progressed, reports were submitted to the state.

At the completion of the assignment, the company sent another letter dated February 9, 2016 to the Debt Management Office to update them on the progress of work done and the outcome of the work done on behalf of Ebonyi State.

“The DMO in a letter dated August 01, 2016, requested the state to attach all relevant documents to back up their demands for a refund. All these documents were duly provided to the state by my company.
“Meanwhile, on completion of the assignment, the Governor sent in two demand letters to the Minister of Finance for the repatriation of the reconciled amount of $119, 419,427.59 being over deductions on the account of Ebonyi State Government foreign loans service. Another letter was also sent to the Director General, Debt Management Office.”

Andrew Bishopton Limited’s boss said immediately after the first tranche of the money was paid to the Ebonyi State government, the state government sent in “their so-called letter of disengagement by quoting that we never did any work since the appointment was given. They also quoted a letter from DMO telling them they do not work with individual consultants.

“The Governor specifically mentioned in his demand letters that what he was asking for was premised on the report submitted by Andrew Bishopton Limited. Yet, they claimed we did nothing. It might interest you to know that Ebonyi State sadly has an antecedent for disengaging consultants at the point of payment for services.

“The first tranche of payment made to the State was N8, 385, 035,086.72 based on the Governor’s Forum payment schedule. We then sent in a demand for our fees of N2, 096, 258, 771. 68 in a letter dated December 11, 2016 because we noticed that the state reneged on the agreement to provide an irrevocable standing order conveying 25% of all money recovered by the consultant and have the fund domiciled in the then Skye Bank.

“When some governors intervened and the Ebonyi State government agreed to pay us N50,000,000.00, which was never paid hence we had no option but to approach the court, which gave judgment in our favour and further freeze the state governments bank accounts,” Ikeotuonye narrated.

Miffed by this, she said that on August 31, 2022, armed men numbering about 10 in number from both Ebonyi Police Command and Garki Police Station “stormed my house at Brains and Hammers Estate in Apo Abuja, with a warrant of arrest purportedly from a magistrate court in Ebonyi that I was under arrest for defrauding the Ebonyi State Government to the tune of N50 million.”

She said she was to sign some documents under duress to vacate the Federal High Court judgment in Port Harcourt.

“Since then Governor Umahi has been after me. Instead of paying me for the services, I rendered as agreed, the Governor is hounding me.”

When contacted, the Special Assistant to Ebonyi State Governor on Media and Strategy, Chooks Oko, denied the threat allegation.

He said nothing could be more satanic, misleading and out rightly fallacious than such an insinuation.
The truth of the matter is as follows.

“Sometime in 2015, Ikeotuonye approached Ebonyi State Government through her company, Andrew Bishopton Ltd requesting to serve as agents to help the state government to recover her share of Paris Club refunds for a fee.

“The state government gave them the contract but called for a review when the governors, under the aegis of Nigerian Governors Forum, collectively made an alternative arrangement that later yielded fruits.

“Having done nothing for the state government, the contract with Andrew Bishopton Ltd was terminated but Ikeotuonye quickly ran to a former president who intervened and got the state to pay her N50 million as final settlement. An agreement was signed to that effect.

“Seeing this breach of contract, the state government moved, got the order quashed and duly reported the matter to the police.

“It is thus the Police that is investigating Ikeotuonye for forgery among other issues.

“They are the ones holding her in line with their duty, in view of the criminal offence she has committed.

“For the avoidance of doubt, Governor Umahi has no hand in the matter as it is strictly her case with the Ebonyi State Government and the security agencies.

“Her cheap blackmail against the Governor is not only ill-advised but would ultimately aid her conviction for the offences she has committed.”