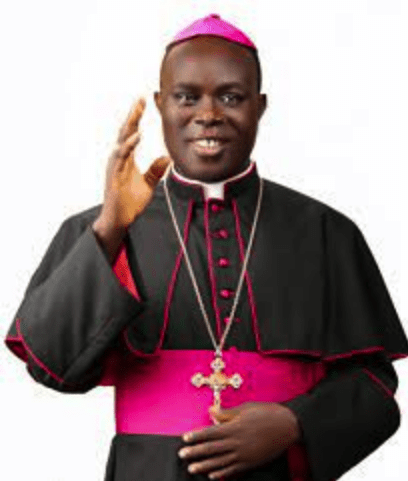 The Catholic Bishop of the Diocese of Abakaliki, Most Rev Fr. Peter Nworie Chukwu, has rejected an award offered to him by the Ebonyi State Government.

Instead, he has demanded that Governor Dave Umahi should ensure the speedy trial and conclusion of the murder and other charges against his priest and not recognition.

The clergyman who is barely one year in office expressed surprise at his nomination for the award of Commander, Ebonyi Hall of Fame, and advised Governor Umahi to bestow the honour on his predecessor, Bishop Michael Okoro, who he said served long and meritoriously.

The Bishop’s position was contained in a reply to Governor Umahi’s letter dated December 12, 2022.

The governor had personally conveyed to the bishop the state government’s plan to confer on him the title of Commander, Ebonyi Hall of Fame said to be in recognition of his illustrious service to Ebonyi State and humanity.

In the reply, His Lordship acknowledged receipt of the letter but expressed surprise over his nomination for such an award and declined it, saying “I am pleasantly surprised that I was selected for such an honour by your government. Your Excellency, I wish to respectfully decline this award. I am barely one year in office. I am still struggling to fit into the high demand of the ecclesiastic office of bishop. So, I feel that I have not achieved much to deserve an award. If I may suggest, I would rather wish that this award be bestowed on my predecessor, Most Rev. Michael Nnachi Okoro for his long and meritorious service to God and humanity. Rather than give me an award, I would prefer you set in motion, actions that would facilitate the termination of murder and sundry charges against my priest, Rev. Father Timothy Ngwuta.”

Father Ngwuta, the priest of Blessed Virgin Mary Catholic Church, Umuhali, who tried to intervene in the release of the car of his medical doctor friend parked at a Police Station in the state is standing trial for alleged murder, since December 2021 when he was arrested, detained, released after 12 days and re-arrested, a development that has continued to generate comments within and outside the country.