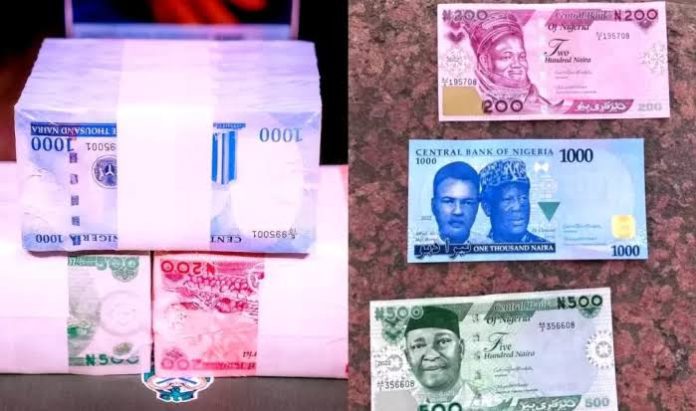 The Central Bank of Nigeria on Friday took its awareness campaign of the newly redesigned notes (N1, 000, N500, N200) to the Lagos Central Mosque at Balogun Market.

The redesigned notes came into use on December 15, 2022, while the old notes will cease to be legal tender on January 31.

The CBN Governor, Godwin Emefiele had said that the January 31 deadline still remains.

A Deputy Director at CBN, Mohammed’Jamiu Solaja, who spoke before the commencement of Friday prayers, explained to the Muslim faithful the major reasons for redesigning the naira.

He urged them to deposit their old notes to beat the deadline and embrace the new notes due to its inherent benefits.

“The Central Bank’s reason for coming here is to get Muslim brothers and sisters in the Lagos Central Mosque acquainted with the newly redesigned naira notes and encourage them to embrace it.

“The aim of the currency redesign is generally to achieve specific objectives such as improving security of banknotes, mitigating counterfeiting, preserving the collective national heritage, controlling currency in circulation and reducing the overall cost of currency management,’’ Solaja said.

He recalled that the CBN governor announced the decision of the apex bank to redesign the highest denominations of the naira on October 26, 2022.

Acknowledging the presence of the Speaker of the House of Representatives, Femi Gbajabiamila, who was at the mosque for a special prayer, Solaja noted that currency management was a key function of the CBN as enshrined in Section 2 (b) of the its Act 2007.

He said that some of the challenges to currency management which includes hoarding of the naira by some unscrupulous members of the public, showed about 85 per cent of currency in circulation was outside the vaults of commercial banks.

According to him, the worsening shortage of clean and fit banknotes with attendant negative perception of the CBN and increased risk to financial stability as well as increasing ease and risk of counterfeiting evidenced by several security reports are reasons for redesigning the notes.

Solaja told the worshipers that the CBN had made sufficient bank notes available and was currently monitoring the banks to ensure that they push the same out to the banking public.

He gave out numbers they could call if there were complaints around the newly redesigned bank notes, urging people to report banks that fail to dispense new notes via their Automated Teller Machines.

Earlier, Sikiru Alabi-Macfoy, Vice Chairman of the Lagos Central Mosque Executive Council, who received the CBN team, commended the apex bank for extending the exercise to the mosque.

He urged the bank to further enhance the campaign nationwide.

“CBN should continuously carry out orientations to everyone on the new policy so that people will know what is going on.

“Also, there should be more awareness on the policy that concerns abusing the naira such as spraying and squeezing of the naira.

“I must also commend the CBN cashless policy initiative. This will really reduce the incidence of naira abuse, and also, for a long time now, I have not been to the bank to carry out any transactions,’’ he said.

Alabi-Macfoy, a former Assistant Manager, Foreign Operations at the CBN in the 1970s, assured that the message of the CBN would be conveyed to the worshipers in different languages that would be easily understood.

The highlight of the exercise was a presentation of flyers and samples of the redesigned notes to some top members of the Lagos Central Mosque present. (NAN)