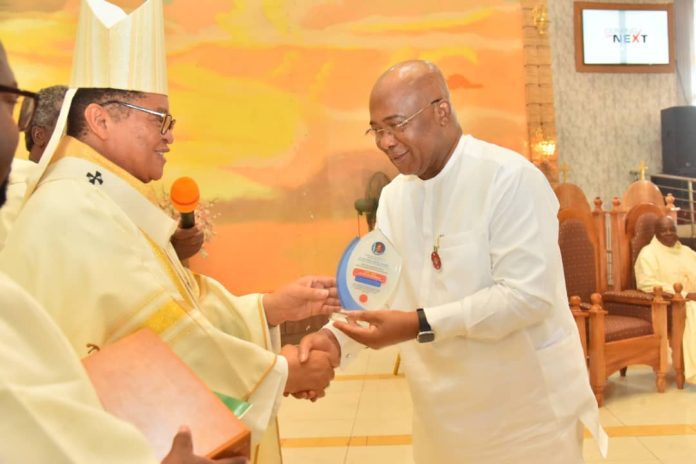 Governor Hope Uzodimma of Imo State has said that boundaries should not be a consideration when one is doing the work of charity.

He has therefore encouraged those who are involved in charity work not to consider where and when.

“Doing good and helping where necessary have no boundaries and people should do good anywhere and anytime the opportunity beckons on them.”

The Governor spoke on Sunday in a brief remark he made after receiving a Plaque from the Catholic Archdiocese of Owerri Ecclesiastical Province /Bishop of Owerri Catholic Diocese, Most Rev Dr. Lucius Ugorji, on behalf of the Catholic Bishop of Morogoro District in Tanzania where Governor Uzodimma was said to have built a Church for the people, assisted by his friend and business mogul, Tony Chukwu.

The Church Service, the first in 2023, was at the Government House Chapel, Owerri, and presided over by Archbishop Ugorji.

Before Archbishop Ugorji presented the plaque to the Governor on behalf of his brother Bishop, Most Rev (Dr) Lazarus Mosquie of Morogoro District Tanzania, a visiting priest from St. John Paul Catholic Parish in the District, Rev Fr Jonas Chukwu read an appreciation message from the Bishop.

Part of the message read: “By the Governor’s benevolence, the Morogoro Community which was abandoned by the country now has a Catholic Parish Church, an Adoration Chapel, a Priest’s Residence, power supply and portable water supply.”

Bishop Mosquie prayed to God to continue to lead, protect and guide the Governor and Chief Chukwu in all their lives endeavours.

Regardless, Governor Uzodimma reiterated his earlier believe that 2023 will be better for Imo citizens and called on them to “enter the new year with renewed determination to achieve all God has planned for us in 2023.”

Governor Uzodimma thanked the Archbishop for accepting to celebrate the Mass at the Chapel, adding that “it is a sign of a very beautiful year for worshipers at the Chapel and Imo people in general.”

He also thanked those found time to worship at the Chapel and prayed for God’s peace and the enabling environment for all to do the jobs assigned to them with utmost responsibility.

“By the Grace of God, the year 2023 will be far better than the previous years and God will, in His infinite mercies, encourage Imo people to come out and vote their consciences in the coming elections,” he said and urged the Church “to continue to pray for the Government and people of Imo State for peace, growth and development, so that Imo State will be better for us all.”

Earlier in his Homily, Archbishop Ugorji reminded the congregation of the significance of the Epiphany, and urged the faithful to remember the reason for the gift of Jesus Christ to mankind.

The wife of the Governor, Chioma Uzodimma, the Deputy Governor of Imo State, Placid Njoku and wife, Bola, the Speaker Imo State House of Assembly, Emeka Nduka and wife, the Secretary to the Government, Cosmas Iwu, the Chief of Staff, Nnamdi Anyaehie, members of the Imo State expanded Executive Council and the Imo State Chairman of APC, MacDonald Ebere, attended the Church Service.