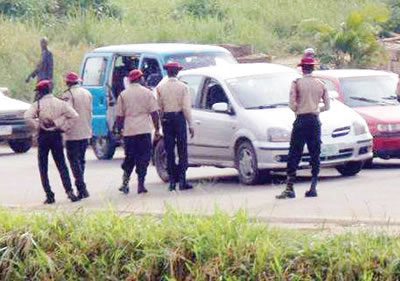 There was confusion along the Gbongan-Ibadan Expressway, Osogbo, Osun State, when an official of the Federal Road Safety Corps, Oluwafunmike Mary Ilemobayo, slipped into a coma when an errant driver named Raheem Ismail allegedly hit her with a charm.

Ismail was reported to have hit Ilemobayo with a substance suspected to be a charm out of rage for fining him for breaking traffic rules.

The FRSC team got Ismail, 45, arrested and handed him over to the police for investigation and prosecution.

He was prosecuted at a Chief Magistrate’s Court sitting in Osogbo on two count charges bordering on assault.

The charge read that “You, Raheem Ismail, on the 12th day of October, 2022, at about 10:20hours along the Gbongan-Ibadan Expressway, Osogbo, did seriously assault one Oluwafunmike Mary Ilemobayo, a member of the Federal Road Safety Corps, Osogbo, while performing her lawful duty, when you used a substance to beat her and thereby committed an offence contrary to and punishable under Section 356 of the Criminal Code, Cap 34, Volume II Laws of Osun State of Nigeria, 2003.

“You (defendant) did, with intent to kill, hit one Oluwafunmike Mary Ilemobayo, a member of Federal Road Safety Corps, Osogbo, to the extent (that) she was unconscious for some hours and thereby committed an offence contrary to and punishable under Section 320 of the Criminal Code, Cap 34, Volume II Laws of Osun State of Nigeria, 2003.”

The defendant pleaded not guilty to the allegations.

When asked by the court to narrate her ordeal, the female FRSC official said that the driver made some incantations before hitting her with charms.

She said, “On 12th October, 2022, at Owode Ede, along Gbongan Road, Marshall pulled him (Ismail) over. He initially refused to give me his licence. He was not with his seat belt and has worn out tyre. He was pleading with me. Nonetheless, I booked him and gave him the ticket to go and pay his fine after I had taken his licence.

“He left. Later, he came with the release note. Afterwards, I said that he should go and meet the Marshall inside the vehicle to get his driver’s licence. He gave him the licence.

“He then approached me, dipped his hand inside his pocket and started making some incantation and hit me. I fell down immediately. I then went to tell my head of operation what happened after some hours. I told my dad that I was not feeling fine and I was having pains all over my body.”

After listening to the complainant, the court asked the driver to explain his own side of the story. Ismail denied Ilemobayo’s narration, saying that he never hit her with a charm.

Shedding tears, Ismail said, “They (the FRSC officials) stopped me. I was driving a Toyota truck which I use in loading firewood that I sell. I didn’t hit her with anything. I had been released but I met them again on my way home. They stopped me and asked me to park. Then, they said that I hit her with something.”

Counsel to the defendant, Oladejo Hameed, applied for bail for his client in liberal term, but Police prosecutor, Inspector Sarafa Adepoju, objected to the bail application on the ground that “if granted bail, it won’t serve as deterrent for others and it would jeopardise the function of the public servants.”

Hameed pointed out that the law presumed the accused person innocent of the allegations until proven contrary in court, adding that the prosecutor’s objections were not based on fact.

Chief Magistrate Olusegun Ayilara discountenanced the prosecution’s objection and granted Ismail bail in the sum of N50, 000 with one surety in like sum.

The matter was adjourned till November 14 for mention.