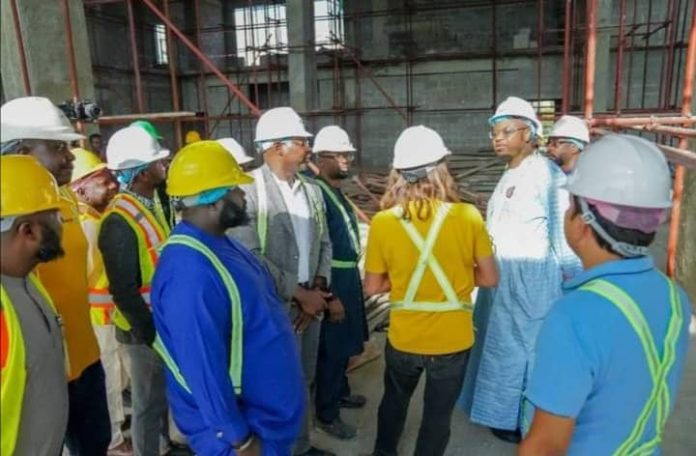 The Minister of Communications and Digital Economy, Professor Isa Ali Ibrahim Pantami has expressed satisfaction with the quality of work being executed by Nigeria’s leading smart real estate developer, Cosgrove Africa, in the ongoing construction of the National Digital Innovation and Entrepreneurial Centre and the headquarters of the National Information Technology Development Agency (NITDA), stating that the quality of the work being executed by the indigenous construction company exemplifies the ability of indigenous companies to execute complex projects in line with world-class standards.

The minister, who gave the commendation at the end of a formal tour of the project site in Abuja on Wednesday, 23rd November 2022, said “ I have visited most of the floors of the National Digital Innovation and Entrepreneurial Centre being implemented by the National Information Technology Development Agency (NITDA) and I am very comfortable with what I have seen here.”

He explained that it is the responsibility of the Ministry of Communications and Digital Economy to ensure that any approval by the Federal Executive Council that is under the supervision of the ministry is implemented according to the agreement. “This is exactly why I am here – to make sure that the implementation is according to the agreement when it comes to the quality, capacity, the rooms there, the offices, and the training centres.

“Based on what I have seen, all these things are in alignment with what the Federal Executive Council approved twice on 11th November 2020 and 6th April 2021” the minister said, adding that the choice of an indigenous construction company, Cosgrove Africa, to execute the project is in line with Executive Order 003 which prioritizes the consideration of competent indigenous companies for projects of this nature.

“By doing so we are creating jobs and supporting our local economy in line with the provision of Executive order 003.”

“As you can see, there are two buildings that are interconnected: One of them would serve as the actual digital innovation and entrepreneurship development centre as approved by the Federal Executive Council, after my presentation on the 11th of November 2020. The second one would also serve as the National Information Technology Development Agency Headquarters that will manage the other centre,” the minister said.

“The quality of the work is also very commendable, I asked critical questions and they were able to respond effectively and satisfactorily,” he said.

While he disclosed that on April 6, 2021, the Federal Executive Council approved an augmentation of the project, the minister noted that the approval was also being satisfactorily implemented.

‘All in all, I am very comfortable,’ he said.

While saying that the entire cost of the project is ‘around twelve billion naira, inclusive of vat and other taxes’, the Minister commended NITDA and the developer of the project for their judicious use of resources, stating that the project could have cost twice the current cost. ‘When you consider the land and the quality of the building and facilities being provided, to be fair, I am very comfortable and this is what the Federal Government has approved,’ he added.

There are one thousand and one ways that our citizens are going to benefit from this project: We have the Nigerian Start-up Act 2022. This building will play a significant role in its implementation. You may have observed that the floors are designed to be centres that will accommodate hands-on training of Nigeria’s young innovators. This is going to be the centre where we will coordinate the issue of tax holidays for them, pioneer status, and intellectual property among others.

Director-General, NITDA, Kashifu Inuwa Abdullahi, commended the minister for giving the Nigerian construction industry the opportunity to showcase the competence of an indigenous Real Estate construction company, Cosgrove Africa, stating that this is the first time a project of this magnitude is being implemented by an indigenous construction company in the FCT, adding that it is being satisfactorily executed in line with set quality standards.

He also commended the Minister for seeking approval for the project as well as approving the commencement of the implementation. ‘This project was conceptualized in 2020 to strengthen national digital entrepreneurship and strengthen the digital ecosystem in Abuja, and it can be replicated nationwide by providing a space where we can bring together entrepreneurs, regulators, and government under one roof to discuss how to move the digital economy forward.

The Director General, described the project as a signature project of the President Muhammadu Buhari administration, adding that the consultants, Cosgrove Africa, are working day and night to ensure that the project is completed within the stipulated timeframe.

Chairman, Cosgrove Africa, Umar Abdullahi, who was represented by the Chief Technical Officer, Cosgrove, Baba Kalli, thanked the minister and the inspection teams from the ministry and its parastatal, NITDA. While saying that Cosgrove Africa is proud to be given the opportunity to showcase the advancement it has made in terms of project competence, he assured that Cosgrove Africa will continue to uphold the values that earned it the confidence, stating that it will not deviate from perfect compliance with standards set by the Federal Executive Council which approved the project.

He commended the minister for his visionary leadership that has made the ICT sector a leading revenue-generating sector in the country, ‘playing a greater role in lifting the Nigeria economy out of recession as well as contributing in a substantive way to economic diversification.’

The Chairman thanked the minister for the commitment to ensuring that an increasing number of Nigerians get basic training on ICT over the last few years, adding that the National Digital Innovation Centre is an addition to the achievements of the administration in the ICT sector.

He assured that Cosgrove Africa will contribute its quota to the development by delivering the project in line with set specifications as a world-class quality infrastructure that will be among the best in the world.

According to the Chairman, ‘the project will provide an innovative platform that is based on work, live, play and learn philosophy while achieving sustainability, minimalism, technology, adaptability and user comfort,’ adding that Cosgrove Africa is happy to be part of it.