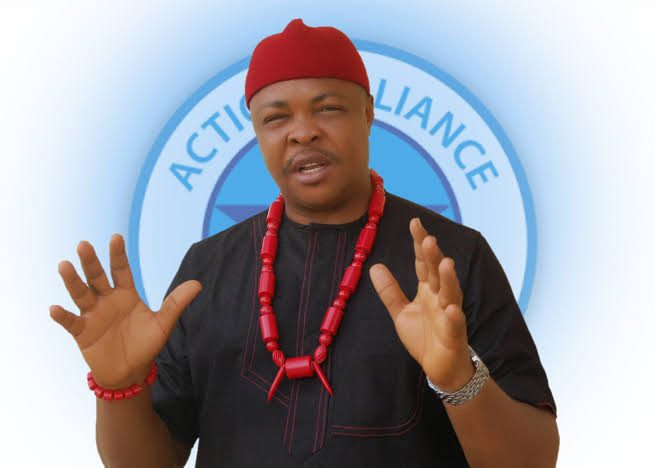 A Federal High Court in Abuja on Tuesday awarded a N1 million fine against Kenneth Udeze for parading himself as national chairman of the Action Alliance.

Justice Binta Nyako, in a ruling, ordered that Udeze and his lawyer, S.C. Uchendu, should jointly pay the fine for abuse of the court process.

Udeze and Vernimbe James, in a motion on notice marked: FHC/ABJ/ CS/1871/2022 had prayed to be joined in a suit filed by AA against the Independent National Electoral Commission.

In the motion dated and filed on November 28, 2022, the duo, through their lawyer, sought an order joining them as co-respondent in the suit
While Udeze claimed to be the party’s national chairman, James said he was the national secretary.

They prayed the court for an order directing the applicant (AA) to serve on them all the processes in the suit.

They argued that they were necessary and interested parties to the matter.

According to them, these parties seeking to be joined are the subsisting and court affirmed national chairman and national secretary of Action Alliance respectively.

In a 12-ground of argument given, they argued that the suit cannot be completely and effectively determined without joining them, among others.

But counsel to the AA, Oba Maduabuchi, SAN, opposed the application for joinder.

He said the only reason a party could be joined in a matter was when the decision of the court would affect such a party.

“But where a matter will not affect him, it is not necessary.

“In this case, applicant (Udeze) is claiming that he is a national chairman but three different courts have told them that he is not a chairman.

“Exhibit A is a judgment of the Court of Appeal which was decided on January 7, 2022,” he said.

Citing the judgment, he said the court held that it remained “incontrovertible that the suspension of Udeze and his expulsion from membership of AA has not been lifted by appropriate authority or any order of the court.”

He stressed that his suspension and expulsion is extant.

Maduabuchi said Udeze’s expulsion was also confirmed by a FHC judgment in Exhibit B.
Referring to paragraphs 15 and 16 of the exhibit, he said the lower court relied on Exhibit A in its decision.

He said the judge said, “by virtue of stare decisis, I found that this application is time wasting and vexatious.”

The senior lawyer said when the judgement was also appealed, the Court of Appeal held that the case was already spent, having failed to contest his suspension and subsequent expulsion.

Besides, he said Justice Zainab Abubakar of a FHC, Abuja also gave a judgment, in a similar suit, that Udeze lacked a locus standi to file such application, describing him as a meddlesome interloper.

“My lord, the Court of Appeal in another decision in Ibadan on Nov. 11 said that Udeze is not a national chairman,” he said.

Maduabuchi urged the court to dismiss Udeze’s request for joinder.

In her ruling, Justice Nyako held that an Appeal Court and three other judges had said that Udeze was not a member of AA, having been suspended and eventually dismissed from the party.

The judge, who held that Udeze now engaged in forum shopping, described the act as “an abuse of court process.”

She, consequently, ordered Udeze and his lawyer, Uchendu, to pay the fine of N1 million and adjourned the matter until January 16 for hearing.

The AA had sued INEC as sole respondent in the suit.

The party is praying the court to compel the electoral umpire to upload all the names of the governorship and state assembly candidates sent to it by the leadership of Adekunle Omo-Aje.

The party had also sued INEC in a similar suit before Justice Zainab Abubakar where the court ordered the electoral umpire to accept and publish the names of the presidential and national assembly candidates sent to it by the Omo-Aje-led leadership of the party.

At a national congress held by AA in Abuja, Solomon-David Okanigbuan emerged the party’s presidential candidate, among others.

The electoral umpire had recognised all the candidates presented to it by the Udeze-led faction. (NAN)