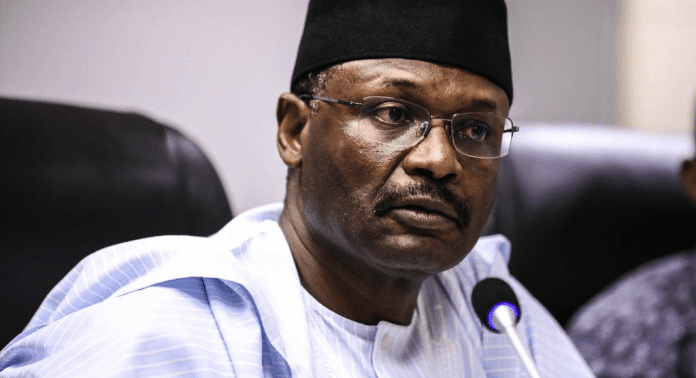 Ahead of the 2023 general elections, critical stakeholders including the political parties, Civil Society Organisations, security agencies and the media have thrown their weight behind the National Chairman of the Independent National Electoral Commission, Mahmood Yakubu, to implement the innovations he introduced in the country’s political and electioneering life in the forthcoming elections.

The political atmosphere has been tense for the past four weeks with the revelation of clandestine moves to force the INEC chairman to dump the idea of employing the services of ICT in the conduct of the forthcoming elections or alternatively be sacked from office.

Spokesperson of the Coalition of United Political Parties, Ikenga Ugochinyere first raised the alarm when at a world press conference he alleged that the ruling All Progressives Congress was working tirelessly using one of its governors from the South East to hatch the plot.

Ugochinyere also claimed that the ruling party’s plot is in two-fold which borders on forcing the INEC boss to jettison the use of BVAS and IReV for accreditation of voter and transmission of results or get him booted out should he insist on using the technology.

The CUPP spokesperson also claimed that the willing tool governor has already gone to a court in his state to press for the stoppage to the use of BVAS and IReV in the forthcoming elections by INEC.

The Point investigations revealed that the management and staff of the electoral umpires have been bewildered with palpable fears following the break of the news as actions evidence confirming the allegations are glaring.

Insiders in the Commission who preferred anonymity told The Point that the allegations by the CUPP spokesperson were about 70 per cent true.

The sources further claimed that most of the staff were under threat by some politicians who want them removed to prove to the national chairman that they are serious about his sack if he insists on the use of BVAS and IReV in the 2023 general elections.

According to our sources, “The news about the intention of some politicians and political parties to stop the use of BVAS and IReV in the forthcoming elections or sack our national chairman if he refused to abandon the use of the technology is not rumour.

It’s real and this is confirmed by the moves we are noticing here in INEC.

“They are bent on ensuring that we don’t use both BVAS and IReV to conduct the election but they have made the mistake of their lives because our chairman is a man of integrity and when he says a thing he makes sure he does it. He has constantly told us that he will give Nigeria and Nigerians the best election results in the history of the country’s political life. He has said time without numbers that BVAS and IReV have come to stay and that Incidence Form has died and buried as far as the 2023 general election is concerned and we have no doubt about that because of who he is.”

Recently, the INEC held its quarterly meetings with the critical stakeholders in Abuja. The meeting which had representatives from the registered political parties, the Civil Society Organisations, security agencies under the aegis of Inter-Agency Consultative Committee on Electoral Security and the media executives in attendance at various schedules threw their weight behind the INEC chairman’s technological innovations towards the forthcoming elections.

The representatives of the political parties in unison assured the INEC boss and the entire management and staff of the commission of their solid support and would remain solidly behind them till the country gets it right by having a free, fair, transparent and credible election in 2023.

“I want to use this occasion to also reaffirm the confidence of IPAC in the leadership of INEC for its consistent demonstration of diligence, uncommon zeal and patriotism in the pursuit of the agency’s statutory mandate.

“On the basis of our evaluation that INEC has been well on track, the leadership of IPAC additionally, wishes to use this occasion to condemn the emerging antics and smear campaign by certain shadowy and cowardly figures who clearly have embarked on the treacherous and unpatriotic conspiracy of reversing the outstanding landmarks, the INEC has recorded in recent years in the annals of the nation’s electoral history.

“To us in IPAC, the real object of the darts of venom being directed at the person of the chairman and the institution of the INEC are merely a decoy. The real target of the machinations is the circumvention of the deployment of the Bimodal Voter Accreditation System, BVAS, the Electronic Transfer of results and the other security devices INEC has deftly and painstakingly put in place to enhance the integrity of the electoral process.

“The spurious allegations they are orchestrating especially in the online platforms are part of the strategies to prepare the grounds for their planned onslaught to achieve their nefarious goal within legal frameworks. It is also aimed at blackmailing and intimidating Professor Mahmoud Yakubu to surrender by compromising the stance of the Commission on the strident, airtight security measures against the maladies of rigging and other electoral malpractices that had perennially tarnished the integrity of elections in the country in the past.

“However, we believe that they will not have their way no matter their desperation and whatever their pranks and machinations.

The use of technology in the conduct of elections in Nigeria has become sacrosanct and fait accompli. Every player in the country’s power game must come to terms with the new reality that they can no longer rig elections brazenly and with impunity.”
The chairman of IPAC further assured the INEC helmsman without hesitation the body’s unflinching supports enroute the conduct of an election Nigerians home and in Diaspora will be proud of, “Mr. Chairman Sir, you can count on the usual support of IPAC, and as it is, the goodwill and backing of most citizens of the country in the present circumstance. We urge you to remain steadfast and strong in the consciousness that you have your hard-earned reputation to protect; that the eyes of the entire nation and indeed, the wider global community are keenly focused on you.”

Yusuf assured the INEC boss that his resolution to turn around the country’s political roadmap with the introduction of workable ICT will definitely enshrine his name on the marble of history globally. “At the end of the day, your choice on the issues currently at stake will go far in defining your legacy, long after our generation. In other words, history beckons on you.”

Ugochinyere would not relent in his efforts to expose what he described as evil plot against Nigeria’s democracy when he told The Point that those perpetrating the plot are not giving up even as they have up their ante after the revelation of the clandestine moves to submerge the political process ably and carefully guided by Professor Yakubu.

“We know those who are behind this evil plot against our country. I’m saying that they are not hidden but one thing is certain, regardless of their drawing influence from the powers that be, we as citizens are wiser than them. We are ahead of them so they can never succeed. Those who are afraid of credible elections who believe the only way they will win is by rigging since they have nothing to campaign with. We will continue to expose their evil plans.

“Prof Mahmood Yakubu should not allow them to distract him. BVAS and IReV have come to stay as he has constantly declared and we will hold him by his words because he is a man who has integrity.

“See what he did in Anambra, Ekiti and Osun States’ off-cycle governorship elections. That is why those who depend on rigging and buying of votes are out for his head but they will never have their ways”

See what he did in Anambra, Ekiti and Osun States’ off-cycle governorship elections. That is why those who depend on rigging and buying of votes are out for his head but they will never have their ways.

“It’s absurd thinking of sacking the INEC Chairman now. I’m happy critical stakeholders including the media are in support of the introduction of technology in our politics and I insist that it has come to stay. No going back.”

A member of the CSOs and Chief Executive Officer Nigerian Women Trust Fund, Mufuliat Fijabi, who spoke on behalf of the CSOs assured the INEC national chairman of their support and expressed the organisations’ commitment to enhancing the process of elections in Nigeria and to having credible elections.

She said “While I commend the Commission, I also wish to state clearly that CSOs, as critical stakeholders, will continue to do our best to make the democracy of Nigeria one that is good and one that we are proud of as Nigerians that remain a standard example for other African countries.”

Abdullahi Abdul who introduced himself as a concerned voter and citizen condemned the move to remove the INEC chairman and stoppage of the BVAS and IReV in the 2023 elections.

He said, “What do these politicians want? Must they throw the country into chaos because of their selfishness? They have the time to sell themselves and their political parties without causing problems but they want a short cut which is rigging. Now they cannot rig by carrying ballot boxes or over voting they want to remove the chairman. We will resist it.

“The government should warn these politicians and their political parties before it is late. If they do anything like removing the INEC chairman before the elections next year, they are calling for crises and if that happens they will not have any hiding place. They should not destroy our country for us and our children.”

Feelers from the INEC show that moves to remove the national chairman was made while he was away in the US on a working tour but the move was resisted by well-meaning Nigerians who warned against the outcome of the decision.

Emeka Sylva, a lawyer and political commentator berated those plotting the act describing them as enemies of Nigeria. He said they have proved that their time has passed and that they are in the past by rejecting the use of technology to conduct elections in this era of ICT.

“Those who know them should expose who they are so that we can shame them. Some of us have seriously longed for this which Professor Yakubu has done and rather than compliment him and his team, they still want the era of ballot boxes snatching and over writing of voters. Why keep their identity secrets knowing that it will make them continue with their push.

“If it is Peter Obi, Bola Tinubu, Atiku Abubakar or Rabiu Kwankwaso or even Sowore, let the identity be made public. We can’t take this. Look at what happened in Kenya recently. We are tagged the giant of Africa but it is like we have become the dwarf of Africa because some people are holding everybody down. It’s time to say enough is enough. If you know you are afraid of contesting, why did you go into politics?

“In fact anyone who is involved in this must be shamed and even treated as a terrorist who wouldn’t want elections to hold.”

BVAS as talking point of 2023 election

2023: Burying the ghost of Muslim-Muslim ticket