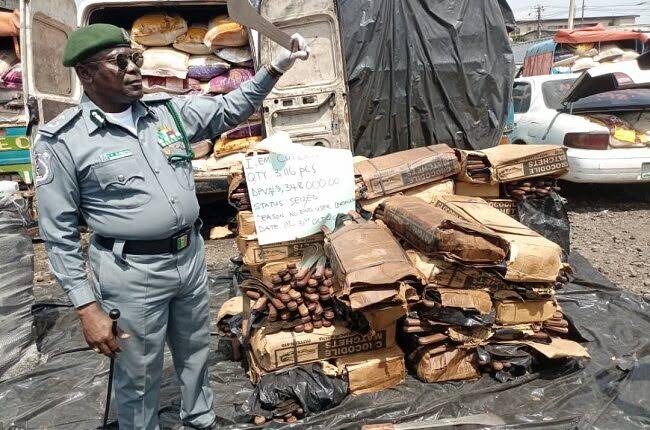 The Federal Operations Unit, Zone A of the Nigeria Customs Service has intercepted 3,116 cutlasses kept in an abandoned hut inside a bush in Oja-Odan area of Idiroko, Ogun State.

Addressing journalists in Lagos on Wednesday, acting Controller, FOU, Zone A, Hussein Ejibunu, also said that aside from the cutlasses, his men also intercepted 7,403 bags of 50kg of foreign parboiled rice, 53,759 liters of petroleum motor spirit, 121 cartons of frozen poultry product amongst others all in the month of October.

According to Ejibunu, “Let me remind you that smuggling in whatever guise or form is an illegal activity that constitutes a crime against Customs extant laws. Primarily among other effects; smuggling compromises national security, robs the nation of her revenue, which consequently affects the provision of basic amenities and social services to the citizens, and it can also destroy your health through the importation of expired, fake, and other illicit drugs.

“These seizures are worth a total duty paid value (DPV) of N671, 609,384.5 and were seized along the border and port corridors within the South West Zone.

“This achievement was possible with the enabling powers of sections: 158 (power to patrol freely), sections 160 – 163 (failure to pay duty on demand, untrue declarations, counterfeiting documents, false scales, etc) of the Customs and Excise Management Act (CEMA), Cap C45 Laws of the Federation of Nigeria, 2004 as amended.

“11 suspects were arrested in connection with some of the seizures and are at various stages of investigations.

“Cumulative revenue recovery within the period under review is N42, 320,098.00. This amount would have been lost to individuals, if not for the diligent and meticulous documentary checks by officers of this unit.

“May I use this opportunity to appeal to the trading community to be patriotic by making sincere declarations, and paying the maximum duties/levies payable to the Federal Government. Anyone found culpable of the aforementioned would lead to economic loss and prosecution as prescribed by the extant laws,” he said.