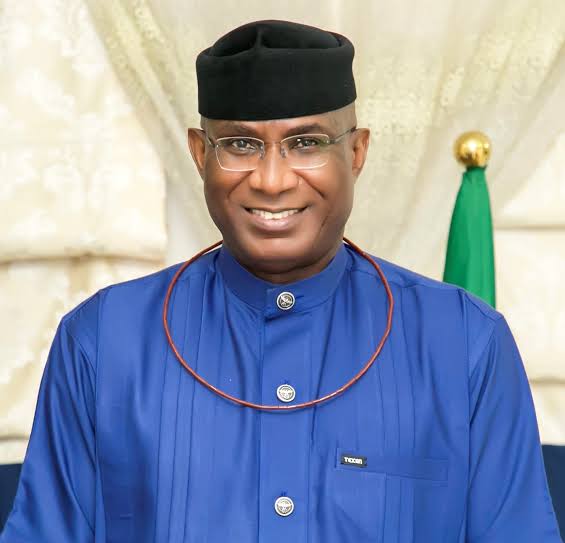 Deputy President of the Senate and Governorship Candidate of the All Progressives Congress in Delta State, Ovie Omo-Agege, has challenged the gubernatorial candidate of the Peoples Democratic Party in the state, Sheriff Oborevwori, to a debate on national television.

Omo-Agege, who lambasted Oborevwori for hiding behind his political godfather and vice presidential candidate of the PDP, Governor Ifeanyi Okowa, in his campaigns, charged Deltans to pressurised the PDP governorship flagbearer to personally speak to them in an open debate to be aired nationally.

He also challenged Oborevwori to tell Deltans what he has done as the longest serving Speaker and what he will do as a governor if elected into office in 2023.

The Delta Central lawmaker spoke on Monday at Orerokpe, Aghalokpe and Adeje towns in the continuation of the APC ward-to-ward campaign train to Okpe local government area of the state.

Omo-Agege, who listed several projects he attracted and executed in Okpe LGA, accused Governor Okowa of abandoning the Technical College at Ororokpe which was the only tangible project Oborevwori attracted to the council as the longest-serving speaker of the State House of Assembly.

The senator further berated Oborevwori for failing to use his influence as a speaker to ensure the completion of the Effurun-Orerokpe-Eku dualisation project in his immediate constituency.

“I’m challenging Sheriff Oborevwori to a debate. I am using this opportunity to challenge Sheriff or Francis Oborevwori to a national television debate. You know the man (Sheriff) likes hiding behind people. He hides behind Governor Okowa and Esiso during campaigns. He should personally come out and tell Deltans what he plans to do for the people of the state.

“Now it’s the question I’m expecting they will ask me. Now as they haven’t asked Sheriff I want to ask Sheriff. As Sheriff is the Speaker of the House of Assembly, he’s the number three man in Delta State Government. I know the things Okowa did for his people, and I knew that in one day Okowa decided to establish three universities. He put one in his village in Owo-Alero, then he put one in Agbor, he set up another one in Asaba and then converted the Polytechnic in Ozoro into a University.

“Now our brother, our son, who’s the Speaker, couldn’t look Okowa in the eyes and say ‘Your Excellency, where is my people’s own?’ But Sheriff couldn’t ask Okowa ‘all these loans that we are approving, which one do you want to use in developing Okpe local government?’

“The only thing Okowa brought here is abandoned. Then meanwhile in the past seven and a half years, this state has received N4.2trn. With all that amount that has come to Delta state look at our road from Effurun to Orerokpe to Ovurie to Eku is supposed to be dualized. Is it not? N20b has been spent on that road already and yet it is abandoned.

“So, we are going to ask questions and we want answers. In Orerokpe here, you have a stadium, is it completed? We are going to be seeking answers. We want Sheriff to explain to us since he’s boasting that he’s the longest-serving Speaker in Delta State. Then we will ask him what did he use his over six years of speakership to do for our people. What happened to our stadium? That bridge between Orerokpe and Agbarho, with all the money entering Delta State with Sheriff and Francis as Speaker what happened to that bridge?”, Omo-Agege queried.

Omo-Agege, however, promised to attend to the developmental needs of Okpe people as well as ensure that the now abandoned Orerokpe Stadium and the Effurun/Eku Road project was completed with him as governor.

Meanwhile, Omo-Agege on Monday made a triumphant entry into Aghalokpe, his paternal grandmother’s family home, where the elders and Kinsmen prayed for his victory at the poll.

Omo-Agege, who was received by the head of the Onokpayunu family of Ereke Quarter in Aghalokpe, said the visit was to prove to naysayers that he was a true son of Okpe Kingdom.

Pa. Adotan, while praying for the actualisation of Omo-Agege and his deputy, Friday Osanebi’s governorship ambition, appealed to the people of the state to vote for their son, saying that he would bring unprecedented development to the state.

In his remark at the rally, Omo-Agege’s running mate, Osanebi, told Okpe people to support and vote for all APC candidates in the forthcoming elections.

Osanebi, a former Deputy Speaker of the State House of Assembly, tackled Oborevwori for failing to use his position to attract projects that will better the lots of his people.

On his part, the former Chief of Staff to the Delta State Government and senior chief of Okpe Kingdom, Chief Paulinus Akpeki, said the people of Okpe were happy to have Omo-Agege, an Okpe son, running to become governor of the state.

He assured Omo-Agege that the people of Okpe Nation will overwhelmingly vote for Omo-Agege and other APC candidates in the forthcoming elections in the area.