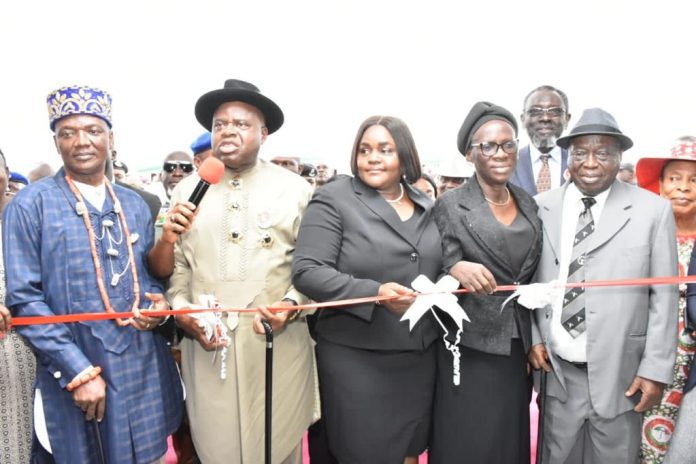 Bayelsa State, on Wednesday, recorded a first in Nigeria with the launch of its electronic court filing system, which will quicken the process of litigation and administration of justice in the state.

The reconstructed complex is named after the pioneer Chief Judge of the state, the late Justice Koripamo David Ungbuku.

Governor Diri congratulated the state’s retiring Chief Judge, Justice Kate Abiri, for the construction and completion of the project in record time.

Chief Press Secretary to the governor, Daniel Alabrah, quoted him in a statement as saying that the electronic filing of documents and work-based access to court materials had become commonplace in many developed jurisdictions around the world.

Commending Justice Abiri for outstanding 13 years of service as head of the state’s judiciary, Governor Diri said the impressive new structure with its modern design is a mark of how much the state judiciary has progressed under her watch.

He also commended the Chief Judge of Borno State, Justice Kashim Zana, for assisting the Bayelsa judiciary achieve the feat towards enhancing the speedy administration of justice.

The governor said it was fitting that the remodelled court complex was named after Justice Ungbuku, describing the gesture as a mark of honour to the late jurist who served the state meritoriously.

“I like to commend Justice Abiri for working with the executive arm of government to deliver good governance. Our Prosperity Administration views the judiciary as an important pillar of our democracy. And that is why we have continued to give other arms of government their dues without hindrance. What we see today is the outcome of that cordial working relationship.

“This edifice is named after the late Justice Ungbuku. I see this as an act of remembrance and honour to those who have served our state. Justice Ungbuku is actually one of our heroes past in the judiciary of Bayelsa State.”

The governor also commended the local contractor, Iniebi Warikoru, for delivering an impressive job and recommended him to the state Ministries of Works and Housing and Urban Development.

In her remarks, Justice Kate Abiri expressed gratitude to Governor Diri for his administration’s support, particularly the prompt release of funds for capital projects in the judiciary.

The Chief Judge said the benefits of the electronic filing process cannot be over-emphasized, noting that members of the Bar and Bench were ready to embrace the technology as training was already ongoing.

Abiri, who also unveiled the practice direction at the event, explained that remodelling of the complex, which originally had two court halls and 24 offices, was concluded within six months, equipped with additional two new court halls and 12 offices.

Also speaking, the Borno State Chief Judge, Justice Kashim Zana, said with the electronic filing technology in place, wherever there is internet connectivity, lawyers can file their cases anywhere in the world to aid quick dispensation of justice.

Justice Zana also announced that the first lawyer to utilize it will win the National Judicial Council prize.

First son of the late Justice Ungbuku, Owendu Ungbuku, expressed appreciation to the governor and Abiri for the honour done to his father, who he noted, served the state judiciary for six years after being the Rivers State Chief Judge for four years.