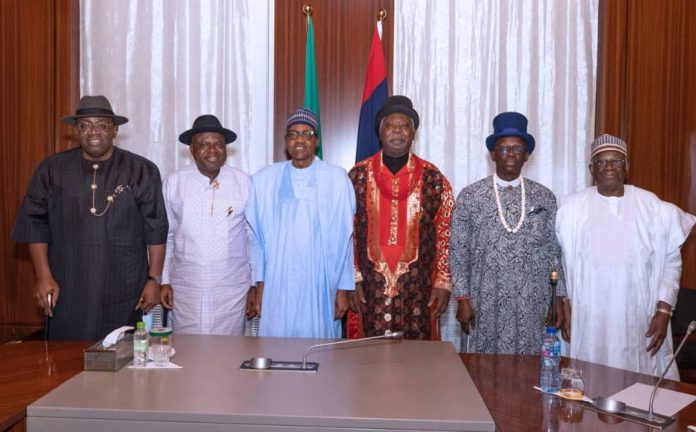 Governor Diri, who was accompanied to the meeting by his predecessor, Senator Seriake Dickson, former Military Governor of Rivers State and Amanyanabo of Twon Brass, King Alfred Diete-Spiff, and the Ibenanaowei of Ekpetiama, King Bubaraye Dakolo, sought the President’s intervention and the support of the Federal Government in addressing some critical infrastructural and developmental issues in the state.

His Chief Press Secretary, Daniel Alabrah, quoted the governor as saying that in pursuance of the President’s policy to establish six new federal universities of medical sciences and bio-medical technology in the country, the state was willing to hand-over the Bayelsa Medical University (BMU) to the federal government to cover the South-South region.

The governor noted that the medical institution was equipped with a 300-bed hospital and had all its programmes accredited by the National Universities Commission (NUC).

The governor equally sought the support and collaboration of the federal government on the ongoing three senatorial road projects in the state. They include the Yenagoa-Angiama-Oporoma-Ukubie road in Bayelsa Central, the Sagbama-Ekeremor-Agge road (Bayelsa West) and the Yenagoa-Ogbia-Nembe-Brass road (Bayelsa East).

According to the governor, Bayelsa, being the most littoral and riverine state in Nigeria, grapples with very peculiar environmental challenges that place greater burden on the cost of infrastructure development.

“This notwithstanding, successive administrations have made spirited efforts to connect the state through massive investment in roads and bridges. Yet we have the least road coverage in the country, which makes most communities inaccessible by road.

“To take advantage of the Blue Economy, my administration has continued the construction of the three senatorial roads designed to terminate at the Atlantic Ocean.

“These roads, which are long-conceived federal projects that have suffered lack of attention, will provide enormous benefits to our communities and enable easy access to our nation’s oil and gas assets.”

The Bayelsa governor also solicited the President’s intervention to resolve the controversy surrounding the revoked Atala Marginal Oilfield (OML 46) licence, which is owned by the state government.

He explained that state government acquired the marginal field through the Bayelsa Oil Company Limited (BOCL) since 2003 but was surprised that in April 2020, a few weeks after he assumed office, the federal government through the defunct Department of Petroleum Resources (DPR) revoked the licence.

Diri stated that the oilfield was reallocated to “a private company based on wrong information supplied to the relevant authorities.”

President Buhari, in his brief response, assured the delegation that he will urgently look into the requests and act on them.